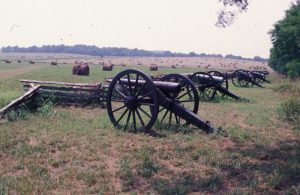 The three major wars fought on American soil were the Revolutionary, the Civil War, and the War of 1812. During three days of fighting in one civil war battle, well over 50,000 Americans died. In an area where there was so much bloodshed and pain, it is no wonder that these very young men stayed around to relive the battles they died in.

Many of the ghostly sightings at these battlegrounds are not, in fact, of actual ghosts as we define them, but of negatives -imprints in time – of the spirits of the dead replaying and flashing back to their last moments, like a tape that has been permanently set on rewind.

This is why the ghosts often have no knowledge of visitors, do not attempt to communicate with the living, and show up so well (compared to other ghost photographs) when caught on film.

As of this writing, all of the battlegrounds listed here are open to the public. Some are now memorial parks; some have paid “ghost tours.” Please respect any and all posted rules when visiting these historic haunt spots.

It’s been over a hundred years since the last soldier fell at the battle of Gettysburg, but many of the soldiers are still seen today. Reports of ghostly armies still marching in step, lookouts and medical tents, and of tearful women and children searching for husbands, sons, brothers can still be seen on late summer evenings.

The military park is left as a monument to three days of bloody history. The park is open all year round from 8 a.m. to 6 p.m. and is located at 97 Taneytown Rd.

Where the final battle of the Civil War was fought, September 17th, 1862, it marked the end of years of horror. In this battle 23,000 men were wounded, killed, or went missing in a single day; on a positive note, this battle led to President Abraham Lincoln’s Emancipation Proclamation.

Park rangers have reported much the same sightings as are at Gettysburg; spectral soldiers running about and nursing the dying. This park is also open daily from 8:30 a.m. to 5:00 p.m.

The ancient Cherokee word for river of death, this is the site of both a bloody battle during the war of 1812 and a confederate victory during the civil war. Workers report hearing war cries and seeing soldiers in the mist. The battlefield and visitors center is open from 8:30 a.m. to 5 p.m.

Site of the Last Stand of U.S. Texans against Mexican General Santa Anna, the Alamo is a proud yet tragic part of the history of Texas. Many say that the spirits of Bowie and Crockett, and the other defenders of this Mission turned Fortress still walk the grounds, and it is a favorite “haunt” of the men stationed at a nearby Army training center for ghostly investigations.

The Alamo is open 9-5 every day, with extended hours on the weekends in the summer. It is located at 300 Alamo Plaza, San Antonio, Texas.

The clash of the U.S. Army and the Western Sioux Nation is forever carved into the American memory for the horror of the June day in 1876. Visitors to the center can view the black marker at the spot where Custer fell, headstones are scattered around it, marking the men who tried to fight off the Indian attack.

Located a few miles from Philadelphia, there were never any battles actually fought here during the Revolutionary war. This is the campsite where General Washington’s Army waited out the winter.

The elements were particularly unforgiving that year, and if you are quiet and listen closely, you can hear the whisperings of men reading out loud to each other and catch a glimpse of shadowy soldiers trying desperately to keep warm.