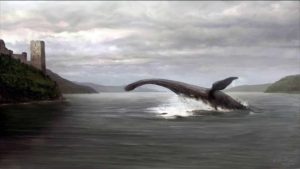 The most famous sea beast native to England is Morgawr, a creature thought to live in Cornwall’s Falmouth Bay. Although “Morgawr” means “sea giant” in the ancient Cornish language, the creature does not possess much of ancient history. Sightings of Morgawr seem to have started since the 1900s.

In September 1975, two people reported seeing a massive creature with a humped back, a long, bristled neck, and a head topped with stumpy horns. They said it dove beneath the surface and then reappeared with an eel hanging from its mouth.

A woman known only as “Mary F.” claimed to have sighted Morgawr in February 1976, and she was able to take two photographs (one of which is shown on this page).

She submitted the photos anonymously to the local newspaper, the Falmouth Packet, which published them on its front page on March 5, 1976. Mary F. included a note containing the following description of what she had seen:

“It looked like an elephant waving its trunk, but the trunk was a long neck with a small head on the end, like a snake’s head. It had humps on the back which moved in a funny way. The color was black or very dark brown, and the skin seemed to be like a sea lion’s… the animal frightened me. I would not like to see it any closer. I do not like the way it moved when swimming.” 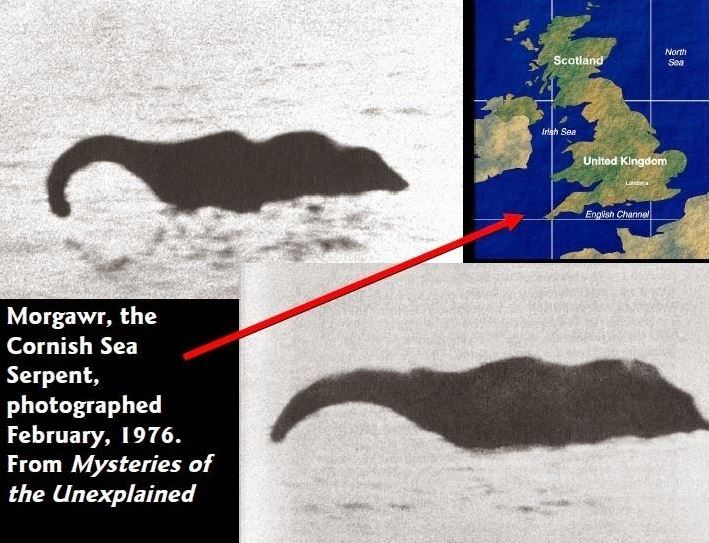 She also indicated that the creature was about 15-18 feet long, and that it was visible only for a few seconds. She apologized for the poor quality of her photography, writing that “The pictures are not very clear because of the sun shining right into the camera and a haze on the water. Also, I took them very quickly indeed.”

Still, her pictures and her description are among the more feasible evidence of lake monsters on record, and certainly the most substantive sighting of Morgawr. Professional psychic entertainer Tony “Doc” Shiels, who was living near Cornwall, photographed Morgawr in July 1976.

Considering his background as a showman, and the fact that Shiels was also lucky enough to photograph Nessie the following year, it seems strongly suspicious that Shiels may have fabricated his photos to cash in on the then-current sensation stirred by the Mary F. photos.

1976: Mary F sent two photos of Morgawr to the Falmouth Packet. Neither Mary F or the negatives have ever been traced. Noted mystery writers and photographers Janet and Colin Bord have examined first-generation copy prints, and “feel that these photographs could well be genuine”.

1976: Tony “Doc” Shiels claim to have photographed the creature lying low on the water. He mentions stumpy horns and describes the body of the animal 15 feet long.

1985: Report of the creature during holiday. It should be noted that Mrs. Waldon was watching her husband swimming in the sea, when she noticed a large silhouette with a long neck.

1999: Tape of unidentified animal on the sea. Last sighting of Morgawr, along with his possible death, because he hasn’t been sighted in 15 years.

What could it be?

various theories have been proposed for as to the identity of this sea serpent, ranging from a hoax or mistaken identity, to the suggestion that the creature is a surviving species of Plesiosaur or that it is a previously undiscovered species of long-necked seal.

In the absence of a carcass or a living specimen, identity explanations depend only on eyewitness accounts and low-quality photographs. It resembles many other species of prehistoric water reptiles, like a plesiosaur.