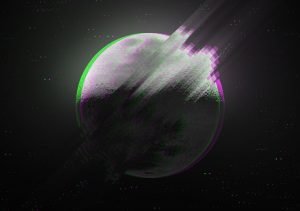 More anomaly hunters have captured the so called “lunar wave,” stating that the moon could be in fact a hologram. Well, at least covered with a hologram at certain points in time. Let’s explore the evidence and contradictions.

This wild conspiracy theory has emerged somewhere in 2014, when Crrow777 of YouTube and other vigilant skywatchers have stumbled across a peculiar wave traversing the moon. Because of this, they’ve insisted that what we see above is not actually a cosmic rock with unique behavior.

It sounded mind blowing at first, because the moon would explain phenomenons such as tides created through its gravitational pull, a scientific hypothesis that’s strongly embedded into the currently accepted model of the world.

The vigilante kept investigating and found out that this peculiar lunar wave only occurred whenever the moon got near its full stance. With this being said, Crrow reached the conclusion that a hologram is projected when the moon is full.

The reason? Because the powers that be need to resurvey the moon at the end of each month, so they conceal it during this procedure.

“My guess is that when the Moon is in its quarter phases, or slivers, or other things, you are actually looking at the Moon.

“I think that when it starts to get full or well-lit on the face, they cover it with a hologram so we can’t see what they are doing under there…It’s not what you think it is, I can tell you that it’s not just a rock in space…there’s a lot going on up there,” said Crrow in one of his videos.

The moon hologram theory gave a good shaking to anyone watching and investigating it, but soon after came an ingenious reply from skeptics.

To debunk this idea, a video had surfaced with an airplane flying just above the objective of the camera and emitting a heatwave that caused an extremely similar anomaly on the surface of the moon.

Debunkers now explained the lunar wave as something caused by contrails or other passing warm/cold air masses and so people thought they were taken for fools. But is this really the case?

The popularity of Crrow’s discovery had drawn the attention of those powers that be, so they had to figure out a clever way to turn the tables.

The airplane passing by hypothesis is sure to offer food for thought, but it only reveals a single possibility. Besides, people all over the US have reported the lunar wave, either when planes were crossing or not. Other captures from remote places are to be considered.

Either way, I’ll present you with more aspects to consider. Light carries heat, which in term can be translated as thermal energy.

This form of energy is generated by tiny particles moving at astounding speeds, which implies that thermal energy generated by a plane’s engine or warm vapors can be perceived as a fluctuation of light. Here is where things become interesting.

In the last century we don’t look at force as an individual notion, but rather as a force field e.g. electric or gravitational force field.

A particular trait of light is that it can be at the same time a particle, or group of particles (the photon) and a type of electromagnetic wave. Both its natures have to be studied separately because otherwise they would contradict. (Source)

While conventional photography focuses on a particle-related light, the last century has brought into perspective a thing called holography. Quoting its definition:

“Holography is the science and practice of making holograms. Typically, a hologram is a photographic recording of a light field, rather than of an image formed by a lens, and it is used to display a fully three-dimensional image of a holographed subject, which is seen without the aid of special glasses or other intermediate optics.”

Do not confuse this type of 3d hologram to what you see in 3d movies, that’s a hologram caused by synthetic light displayed through the glasses, a big difference.

Another thing to note is that holography can store about 700 times as much information as a conventional photograph, it can provide an ample 3d view in a single caption. Such a technique uses laser light provided by, you guessed it, a laser beam.

If we were to live inside a holographic universe like numerous scientists nowadays believe, an enormous laser system would have to be pointed down at us.

This makes sense now more than ever considering all the breakthroughs in physics, and if we look above we see this huge source of light we call the Sun. It’s definitely pointed at us and it’s sending encoded information.

If this were to be the case, the moon would have to play the role of an artificial control panel that serves as who knows what. Maybe a green screen? A curtain? An artificial device meant to keep an eye on us?

Ignorance is bliss, and reality is way stranger than fiction. By researching and questioning everything you’ll end up finding certain answers. After all, the reality we perceive is only inside our minds.

The Earth Signals Change: A Mysterious Leap in Schumann Resonances