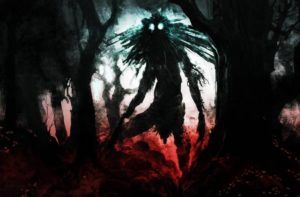 Most likely, John Keel’s paranormal classic “The Mothman Prophecies,” will remain as the starting point for anyone interested in stories of the bat winged flying beasts now commonly called Mothman or Man Bats. While Keel tells the story of what happened in Point Pleasant, WV, in 1966 and 1967, the flying creatures that many consider to be an omen of death and destruction have been reported in many locations over the years. One of the best reports comes from LaCrosse, Wisconsin.

THE SIGHTING OF THE WISCONSIN MAN BAT

As this story comes from Wisconsin, the case cannot be examined without reading the work of Linda Godfrey, best known for her writings on another Wisconsin creature called the Beast of Bray Road. Godfrey is, in my opinion, the expert in the world of Wisconsin strangeness. It is from Godfrey’s work as well as other sources that the information in this story was gathered.

The 2 men are driving a familiar route on Briggs Road near LaCrosse after practicing with their band. The men were Cherokee, a 53-year-old father named Wohali and his 25-year-old son, whose identity has never been established.

It was between 9:30pm and 9:45pm when Wohali, who was in the passenger seat of the truck, saw a massive flying beast flying straight towards the trucks windshield. Wohali’s son also saw the Man Bat and swerved the vehicle to avoid a collision. The move wasn’t needed, as just before impacting the windshield the Man Bat zoomed straight up in the air, “screaming,” as it disappeared into the night sky.

Wohali described the Wisconsin Man Bat as being dark-colored, 6 to 7 feet tall, with huge 10 to 12 feet bat like wings and long claws. He added that the flying oddity appeared to have a snarling appearance to its face. Immediately after the encounter both Wohali and his son became violently ill, it took about a week before Wohali had fully recovered.

The story of the Wisconsin Man Bat is an interesting one. A man and his son encounter a bizarre creature, whose existence would seem impossible, on a routine trip home. They never saw it before or since and the story appears to rely on the tale told by just one man, Wohali. There were however other strange sightings in the LaCrosse area at about the same time that may be related to the Wohali encounter.

Details are sketchy but on at least 2 occasions people reported sightings of winged creatures near LaCrosse, they share some similarities to the description of the Man Bat given by Wohali. The first of the secondary Man Bat reports comes from a father and son searching for their lost dog.

The 2 reportedly encountered a large brown winged beast which they said had a reptilian appearance. The creature appeared to be covered with scales and kept its’ wings against its’ back. The father and son never saw the Man Bat fly as they quickly left the area.

On another occasion a Game Warden and men working on Hwy 13 saw a massive flying creature overhead. It’s huge wingspan and reptilian appearance was unlike anything they had seen before. The Man Bat soon flew out of sight leaving the witnesses stunned.

WHAT IS OR WAS THE WISCONSIN MAN BAT?

If the descriptions of the Man Bat as given by witnesses is accurate, which is always questionable, there is no known bird, bat or other creature that match what witnesses claim to have seen.

As I said at the beginning of this post, any study of the subject of the Mothmen/Man Bat begins with “The Mothman prophecies.” Perhaps John Keels’ interpretation of the countless encounters with the strange he experienced over his lifetime provide an answer.

Keel believed that many reports of the Man Bat and other mysterious creatures as well as UFOs were quite real, part of what Keel called the bigger or greater reality. He believed that the beasts are real beings from another dimension or place and that they have always been among us.

Occasionally, when conditions are correct, Keel believed the otherworldly creatures were able to manifest themselves in our everyday world and disappear as quickly as they came.