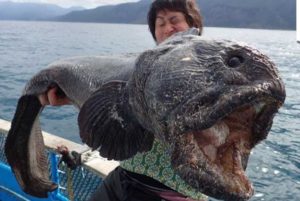 Long before the dawn of man, before dinosaurs roamed the earth, some 400 million years ago, sharks cruised our oceans. As far back as two million years ago, before its extinction, one shark glided through the ancient waters, but not just any shark.

A true king of the ocean known as “Megalodon” or “Carcharodon megalodon.” This monster was said to be 60 feet long and 77 tons. This formidable beast had 46 front row teeth, 24 upper, and 22 lower teeth.

It would have eaten at least 2,500 pounds of food a day, including whales and other large marine life. What a bad day it would have been for any creature that ended up in the jaws of this creature.

So when most people consider monster sized flesh-eating fish, one of the first ghastly images that usually comes to mind is the “Great White Shark” or “Carcaradon carcarious.”

In 1975, the movie “Jaws,” directed by Steven Spielberg, and written by Peter Benchley, hit movie screens all over the world, spawning multiple sequels in its stead.

But sharks are not the only fish that cruise the waters in search of a meal. There are other fish that live in brackish and fresh waters that grow as large as men or boats, and are said to have a taste for human flesh. Fact or fallacy? Consider the following stories.

Noodling, grappling, hogging, are terms used for catching catfish with your bare hands, rather than by rod and reel. It is dangerous sport that some fishermen consider exciting.

These fishermen have many scars that tell of the painful struggles they have encountered with catfish, some that are over five feet long and over a hundred pounds. These fishermen swim along the shores of lakes where rocks or submerged trees are, in search of deep pockets where catfish can hide in.

The grappler will reach into the pocket, grab the fish by the gills, and wrestle the fish out. He then wraps his legs around the fish’s tail. Often, the struggle between man and fish can go on for a few minutes until the fisherman has control of the fish and is able to pull the fish to shore. One fisherman, Lee McFarland, had an encounter with a giant catfish that almost took his life.

In 2002, in Lake Carl Blackwell, McFarland was searching for catfish and managed to capture a monster catfish. The fisherman had no idea what was in store for him. As he wrapped his legs around the fish to control it, the fish overpowered him.

It began twisting with McFarland and pulled him under the water. The struggle continued and McFarland was losing the battle. This fish intended to kill the fisherman, rather than be dragged to shore, and was succeeding.

Fortunately, McFarland managed to break free of the killer fish, and reached the waters surface to safety. This monster fish was estimated to be over a hundred pounds. Although this sport is exciting to McFarland, and he wouldn’t dream of catching these fish any other way, he also admits that “no fish is worth dying for.” What true words of wisdom spoken.

The Great Kali River, which borders India and Nepal, has experienced the disappearances of villagers for over 20 years ago. The creature that was killing and eating humans was described as looking like an elongated floating pig in the water by eyewitnesses.

In 2007, an 18 years old man, was attacked and pulled under the water by the mysterious “River Monster.” He was never seen again, as in the other cases of disappearances.

A British biologist, Jeremy Wade, investigated the river mystery. He found that the monster was not a crocodile and ruled out other species of land predators. Wade discovered a colony of monster sized “Goonch Catfish”or “Bagarius yarelli.” The biologist then managed to catch one. It was 6 feet long and weighed 161 pounds.

Wade conceded that a monster fish of this size could take hold of a human and there would be no escape. He was also quite certain that much larger monsters lurked in the Great Kali River.

Since these fish are known as scavengers, it is no wonder that they would kill and eat humans. But to better understand this mystery of the “River Monster,” another story that came to surface that would shed new light on the river tale.

In 2004, a young man was swimming in Pine River, Minnesota. He hadn’t swam out very far and decided to turn around and head back to shore. He was in knee deep water, wading near the shore when he was attacked on his ankles by a toothy fish.

There was a sharp jolt of pain as the young man struggled with the fish, broke free and made it to shore, but not before noticing how badly his ankle had been injured. Looking back at the water, he noticed it had turned red where he had just been attacked.

After studying his wounds, experts believed he had been attacked by a native fish known as a “Pike” or “Muskellunge.” The young man carries the deep scars from the attack to this day, as a reminder that even under the most seemingly tranquil waters, danger can lurk.

The Pike (Musky) can swim up to 30 miles an hours and has razor sharp teeth that are used to tear apart its prey. These fish are carnivorous and will attack mostly anything that moves in the waters.

Although humans are not the usual targets of their attacks, they do happen. The largest musky caught on rod and tackle was 67 lbs. and over 60 inches long. The two largest pike were found in Minnesota where the swimmer was attacked. The northern pike, and the larger Muskellunge.

In October of 1998 the jaws of a dead musky was found on an island beach in the Chippewa Flowage, Wisconsin. The Woehler family couldn’t believe what they were looking at when they came upon it. Because there was still enough of the body left, they knew it was a large musky, probably the largest they had ever come across.

Wildlife experts feel that the fish might be considered a world record. A recreation of the jaws set the size of the musky at over 6 feet long and at least 70 lbs. of fearsome fish. The Treeland Resort has kept the original jaws found, behind a glass case.

The cold waters of the Arctic Circle also holds deep sea monster fish. In July of 1987, one fisherman had an encounter with a fish as big as his 14 foot boat in Point Lake, Canada. The man and his friend were in at least 50-60 feet of water and got a bite.

A struggle to pull the fish in lasted six hours. The fish pulled so hard the rod began to crack. The fisherman was finally able to draw in the fish for a better look and couldn’t believe his eyes.

The fish was as big as his boat. With the strain on the cracked rod, it finally snapped in four places, and the fish got away. It would have been the catch of a lifetime for this man.

The shape and color of the fish led the men to believe it was a monster sized lake trout. Lake Trout are known to be one of the strongest fighting fish in the lakes. The largest trout caught with a rod weighed over 72 lbs. and 59 inches.

There have been others that weighed in at 120 lbs. Because the area of Point Lake is not a hot spot for sport fishing and the area is so remote, fish thrive in these cold dark waters and live up to 50 years or more.

Do monster fish with a taste for human flesh lie in wait for unsuspecting victims to enter the waters? In many cases yes. But most likely they are opportunistic feeders and simply go for the first closest thing that is easily available, and unfortunately, in some rare cases, the menu plan just happens to include humans.

And as for the sport of fishing, it will continue to be a passion for some, and a favorite pastime for others who have a taste and love for it, regardless of what monsters they may come up against. In this case it is welcomed.

In this quest to find answers to this puzzling and seemingly growing menace, we are left with even more questions, and an ever-increasing fear of the unknown.

And what is more disturbing are the images conjured up in our minds as we step foot in the murky green waters to cool off or throw a line out. Because you never know what may be lurking just under the tranquil surface of your favorite lake or oceans.

There Are Already 8 Billion People on Earth