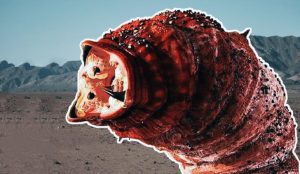 The olgoi-khorkhoi, or more popularly known as the Mongolian Death Worm gets the “death” part in its name not just because it kills but because of the wide array of ways in which it can: electric shock, acid, and of course just straight up eating you.

It also doesn’t hurt that the creature is a good five to ten feet long. Welcome to the Gobi Desert…

The Gobi Desert is an ominous terrain covering over half a million square miles. It is so cold and provides so little of the water needed to sustain a human civilization that the entire region of over 500,000 square miles is home to no more than one million people.

The landlocked position, harsh environment, and rocky geography of the Gobi have effectively cut off these residents from the rest of the world and ensured that their culture has for the most part remained unchanged for thousands of years.

When we talk about cryptids, we are usually referring to creatures that border on urban myth such as the Lizard Man of Scape Ore Swamp. Witnesses or believers of these creatures are few and far between, but in the Gobi Desert you would have a very difficult time finding a local that does not regard the Mongolian Death Worm as just another part of the wildlife.

The Mongolian death worm’s proper name amongst Gobi locals is олгой-хорхой or olgoi-khorkhoi, which translates fairly directly as “large intestine worm”, a name it received due to its shape and colour. 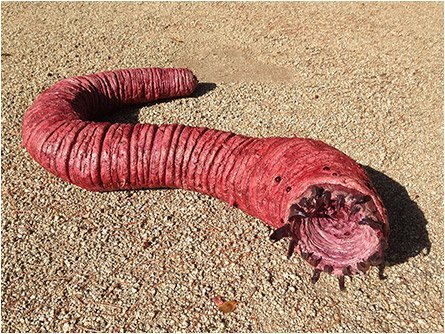 It’s said that the outer flesh of the worm resembles a human intestine in texture and is bright red as though is just crawled out of something’s body. The worm is about as deadly as it gets, it has the ability to spew forth an acid that, on contact, will kill anything it touches corroding almost like rust, but that’s just for close range.

For long range the Mongolian Death Worm can kill at a distance by meters by means of electric discharge.

At this point you’re probably hoping that these creatures are just a portion of local myth and far from having any real foundation; you’ll be glad to hear that no photographic evidence of the creature exists.

Unfortunately in a desert expanse of over 500,000 square miles this is not surprising. Numerous expeditions have been launched into the region to attempt evidence, many have come close discovering massive caverns that could not be explained away by other natural phenomenon, skeletons of animals have been found that appeared to have been rotted by acid, but no photographic evidence of the Mongolian Death Worm itself.

What we do know as science is that the Mongolian Death Worm is not entirely unheard of on this planet. There was a creature very similar and also described as a giant worm that lived in the Precambrian era roughly 542 million years ago.

At this time in history the Earth would have resembled the Gobi almost exactly. For centuries we believed that the Precambrian worm had simply died out, that is until Dr. Kevin Page and his team discovered fossils deep below the surface of the English seaside that pointed to the worm simply growing smaller to accommodate a less hostile terrain.

The Gobi Desert however never did change, and perhaps neither did the Mongolian Death Worm.