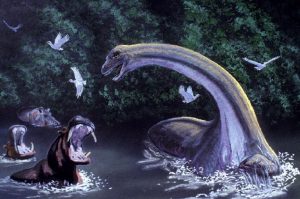 From the early 1600’s European travellers in central Africa have reported the existence of a monstrous mystery creature.

According to Abbe Proyart, a French priest who published a history of the African interior in 1776, missionaries had seen tracks with claw prints that were at least 90 centimeters (about 3 feet) in circumference and over 2 meters apart (a little more than 6 1/2 feet).

Pygmies inhabiting the Likouala swamplands of the Congo claim to have seen this mysterious animal, which they call in their native tongue mokele-mbembe. Eyewitness accounts describe a huge, timid beast that spends a great deal of time in the water.

It is said to be the size of an elephant, with four thick sturdy legs, a slender 3 meters (9.8 feet) long tail, and a roughly 1.8 meters ( 5.9 feet ) long neck with a small head. On land, the beast leaves a distinctive three-toed footprint, a characteristic of certain types of sauropod dinosaurs, but unlike the tracks of any contemporary animal species.

When shown pictures of living and extinct creatures, the pygmies pick sauropods (such as the pictured Apatosaurus, once known as Brontosaurus) as the closest match to mokele-mbembe. Similar reports come from neighboring Cameroon and Gabon, where the animal is known as n’yamala.

Discovering species thought to be long extinct alive is not without occurrence, nor is the Congo unique in its claim of living fossils. In 1938, off of the coast of South Africa, a fish was caught that was later identified as a Coelacanth, which until that time was believed to have been extinct for 60,000,000 years.

In Zambia and Zimbabwe, people are afraid of the flesh-eating Kongamato, a flying lizard with a great wingspan and a long beak filled with teeth, much like the long-extinct pterodactyl.

Since the early 1980’s several scientific expeditions have searched for conclusive evidence that the mokele-mbembe really exists. One investigator, Roy Mackal, a professor of zoology at Chicago University, took teams to the Congo in 1980 and 1981 to search for the elusive creature.

Although they failed to encounter the beast, they collected important anecdotal evidence, including information on its primary food source, a type of vine. In 1985 and 1992 British explorer Bill Gibbons added further local reports to the ever-growing dossier.

Mokele-mbembe may not be the only living dinosaur inhabiting the Congo. One is a Triceratops-like monster called emela ntouka.

The other is Mbielu-Mbielu-Mbielu, a bizarre creature described as having planks growing out of its back, which the pygmies identify with Stegosaurus.

Could some dinosaurs have defied evolution and still be living in the Congolese swamplands? Only future explorations will tell. But it is hard to discount these myths out of hand, especially when stories of cryptozoological creatures come from all over the planet.