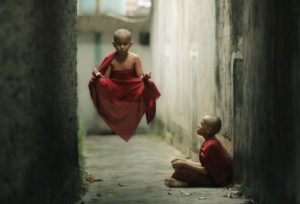 In Oriental mythology gods have one distinguishing feature – they could fly. But ordinary mortals, albeit very few, also possess the unique art. For example, Indian Brahmans, yogis, saint hermits, magicians and fakirs master the art of levitation.

The Indian Vedas (translates as knowledge from Sanskrit) contain even practical guidelines to levitation. However, most ancient Indic words and concepts lost their meanings and concepts through the years, which makes it impossible to translate the priceless ancient text into modern languages.

As to ancient levitators, they could raise themselves up to 90 centimeters above the ground. They did so because the position with feet above the ground was more comfortable for them in terms of their religious rituals. They never levitated to startle anyone.

In ancient times levitation was practiced in India and Tibet. Buddhist texts say that in 527 A.D. Hindu founder of Zen Buddhism, Bodhidharma, visited the Tibetan Shaolin Monastery and taught the monks to control the body energy, which is a mandatory condition for levitation. Buddha himself practiced levitation too, as well as his mentor Sammat who could stay in the air for hours.

Nowadays, Indian and Tibetan people still practice levitation. Most oriental researchers described the phenomenon of flying lamas in their works.

For example, British explorer Alexandra David-Neel watched with her own eyes a Buddhist monk sitting motionless in the lotus position, flying tens of meters, touching the ground and raising up again the way a ball bounces up and down after a throw.

Levitation was known long ago not in the East alone, but in Europe as well. Moreover, medieval European levitators also possessed their own peculiar feature. Unlike Brahmans, yogis and lamas, none of them had to master the art of levitation. They could fly above the ground in religious ecstasy without being aware of it.

St. Theresa, a Carmelite nun, is one of the first officially documented levitators. 230 Catholic priests witnessed her flight. She described her unusual gift (as she called it) in her autobiography dated from 1565.

“Levitation comes like a blow, sudden and sharp,” she writes “and before you collect your thoughts and come to your senses, you feel taken away by a cloud and a grand eagle…I was aware of myself hanging in the air… I must say that when the levitation ended, I felt an unusual lightness in my body as if I was weightless.”

The best-known ‘flying man’ is Joseph Desa (1603-1663), named Saint Joseph of Cupertino after his native village in South Italy. He had been unusually pious since his childhood and tortured himself to reach religious ecstasy. After he joined the Order of St. Francis, he started to levitate in a state of ecstasy.

It once occurred in front of the Head of the Catholic Church. Joseph came to Rome and was granted an audience with Pope Urban VIII. When he first saw that, he was so exalted that he soared in the air until the Head of the Order of St. Francis had brought Joseph to senses.

Scientists of that time observed his levitations more than a hundred times and left behind official evidence of their research. The flights embarrassed the faithful. They ordered him to move out from Assisi to a remote monastery in 1653. Afterwards, he continued his journey moving from one monastery to another. Finally, Joseph was transferred to the monastery in Osimo, where he fell ill seriously in the summer of 1663 and died the same year in September. He was canonized in four years.

According to church records, there were about 300 people who exercised the art of levitation in front of the eyes of the faithful. Seraphim Sarovsky and John, an archbishop from Novgorod and Pskov, belong to Russian levitators. Moscow chronicles tell of Basil the Blessed, who was carried by unknown power over the Moskva River in front of crowds of people.

The most prominent levitator of the 19th century was Daniel Douglas Hewm. The editor of an American newspaper described his first well-known flight as follows:

“Hewm suddenly began taking off the ground, which came as a surprise to all the people around. I took his hand and saw his legs. He was lifting a foot away from the ground. It was a confounding variety of feelings – alternate fear and rapture made Hewm quake and he seemed speechless at that moment. Some time later he got down and then up again. For the third time he reached the ceiling and touched it with his hands and feet.”

Later on Hewm learned to levitate at will. For forty years he showed his gift to thousands of spectators, among whom there were such famous people as William M. Thackeray, Mark Twain, Napoleon III, well-known politicians, doctors and scientists. He was never accused of swindling.

Daniel Douglas Hewm was not he only one to bewilder scientists. In 1934, Maurice Wilson of England, who adopted yogis’ approach and trained levitation for years, resolved to soar up in great leaps and reach Everest. Next year his frozen body was found in the mountains. He almost reached the top of the world.

Nowadays people who adopted yogis’ approach to levitation succeed most. The state of levitation can be achieved through transcendental meditation developed by Maharishi Mahesh Yogi. His goal was human perfection by liberating consciousness and realizing all possibilities of the human body.

In 1971 the new Messiah founded his university in Fairfield, Iowa. Afterwards they founded the European research centre in Switzerland and training centres in Germany, England, India and other countries. Experts were invited there – physicists, connoisseurs of the Indic philosophy, mathematicians, doctors, engineers and psychologists united by the goal to make man happy. One of the tasks of the transcendental meditation was to teach people levitation.

Despite numerous cases of levitation it is thought to be a miracle or a mysterious phenomenon contradicting to scientific principles. Judgments about the physical nature of levitation are rather contradictory too. Some researchers consider that levitation is the result of the biogravitational field that is created by special mental energy radiated by the human brain.

Doctor of Biological Sciences, Alexander Dubrov, supports this hypothesis. He points out that a levitator deliberately creates the bio-gravitational field, that is why he is able to control it and change the direction of his flight.

Until recently, many respectable scientists did not take levitation and antigravitation seriously and harshly criticized it. Now they have to reconsider their position.

In March of 1991, Nature magazine published a sensational picture: the director of the Superconductivity Research Laboratory in Tokyo was sitting on the dish of superconducting ceramic material. There was a gap of air between him and the floor. The total weight of the director and the dish was 120 kilograms, which did not prevent him from levitation.

Later this phenomenon was dubbed as the Meissner effect. It is the expulsion of a magnetic field from a superconductor. Walther Meissner and Robert Ochsenfeld discovered the phenomenon in 1933 by measuring the flux distribution outside of tin and lead specimens as they were cooled below their transition temperature in the presence of a magnetic field.

Types of Intuition: How to Recognize Signs of Extrasensory Perception