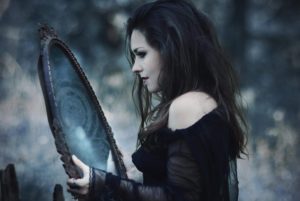 “Mirror, mirror, on the wall; who’s the most mysterious of all?” The mirror chuckles knowingly and answers, “I am.”

It’s true – mirrors have always both fascinated and frightened humans. After all, if it could capture and reveal our likeness so well, what else could it reveal about ourselves, or the world around it? What other mystical powers could it have?

Mirrors abound in legend and lore, superstition and spirituality. Some scoff, others swear there is more to a mirror than meets the eye. Let’s have a look at the kinds of things people think lie beyond the reflective surface.

REFLECTION OF THE SOUL

Many ancient cultures thought reflections were not of your physical self, but of the very soul. Some cultures even believed the mirror image at which you were staring revealed the shadow self – the dark side of your nature.

This is why it was believed that evil creatures without a soul, such as vampires, did not have a reflection.

GATEWAY TO OTHER WORLDS

Many psychics and spiritualists have long held mirrors to be portals to other realms of existence. Judaism is known for the tradition of covering the mirrors in a house during the mourning period after a loved one dies – some reports are that this tradition developed so the spirit wouldn’t be trapped on earthly realms and could move to Heaven.

During Victorian times, it was believed by some that by setting up mirrors to reflect each other in just the right way, one could see the spirit world in the reflections.

Urban legends have long held that spirits could be contacted through mirrors. Stories abound about what has happened to people who go into a dark room, look into a mirror and call a known and dangerous spirit several times. The most famous of these stories is Bloody Mary– and while many dismiss the claims, others will tell you in earnest about experiences in which they saw something, found unexplained scratches on their bodies or experienced paranormal phenomenon for weeks after the stunt.

Some psychics and practitioners of magic use the reflective surface of a mirror by the light of a candle to induce visions. It is believed by these people that the mirror acts in the same way as a crystal ball– a reflective surface is the ideal place for the mind to project the visions that come.

To this day, who doesn’t shudder when accidentally breaking a mirror? It’s been drilled into our consciousness that seven years of bad luck will ensue. I don’t know about seven full years, but this idea dates back to the idea that the mirror traps souls. When your break it, it frees the angry, trapped souls from within who then have nowhere to go and nothing to do but haunt the nearest person– the person who broke the mirror.

Feng Shui, the Asian art of arranging a home for optimal flow of positive energy, has a lot to say about mirrors. Using mirrors to visually expand a room and bounce more light into it also expands fills it with beneficial energies. If there are any areas in the home where the energy gets trapped or doesn’t flow properly, a carefully placed mirror can help redirect the energy to a more productive flow.

In feng shui, mirrors are believed to bring calm. They have the same effect as the element of water, probably because their reflective surfaces are reminiscant of a still pond. Round mirrors are brought in to attract abundance and wealth to the home.

So, should we just write off mirrors as fantasy fodder? Perhaps… or perhaps we should give a little more thought to the mirrors we bring into our homes, where we place them and how we treat them. Maybe there is more to them than what they seem to be on the surface.