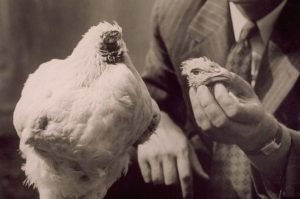 The story of Mike the Headless Chicken began on September 10, 1945. Colorado farmer Lloyd Olsen, went out to his chicken coop to get a chicken for dinner.

Olsen chose Mike, a 5 month old rooster. Olsen grabbed Mike with one hand and an axe in the other. Bam! and Mikes head was gone, at least most of it. Olsens aim was not very accurate, leaving Mike with one ear.

Mike did not die however. It seems Mikes brain stem was unharmed in the botched decapitation. Mike could walk, sit on a perch and even attempted to preen himself. Olsen fed Mike milk with an eye dropper and small grains of corn. 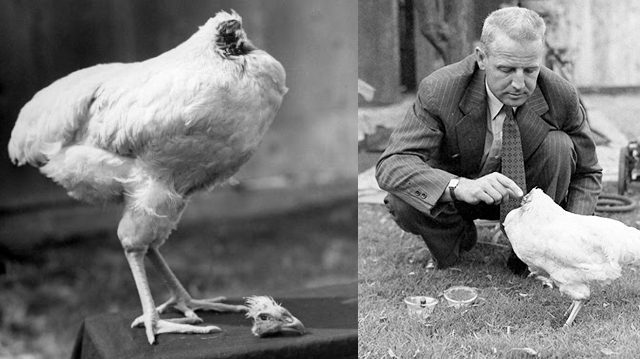 Word of the headless chicken spread and Mike became famous. He appeared in side shows where you could see Headless Mike for just 25 cents. Mike was photographed for Time and Life magazines.

Mike the Headless Chicken, Miracle Mike, died in March of 1947. About 18 months after losing his head.