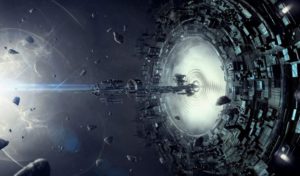 There are probably thousands of alien civilizations living in the Milky Way, but our chances of ever meeting them are extremely low, an expert has said.

Michael Garrett, head of the Netherlands Institute for Radio Astronomy (Astron), made the comments at the International Astronomical Congress in Toronto.

As reported by Discovery News, the astronomer said data collected by Nasa and other space agencies suggests that Earth is one of 40 billion potentially habitable planets in our galaxy.

However, Garrett said that with the sheer size of the Milky Way, sending out signals and receiving one back from a civilization advanced enough to possess this technology is unlikely at the moment.

“On average, you’d expect the civilizations to be separated by at least 1,000 light-years in the Milky Way,” he is quoted as saying. “That’s a large distance, and for communication purposes, you need to allow for twice the travel distance, so you’re talking about civilizations that have to be around for at least a few thousand years in order to have the opportunity to talk to each other.”

He pointed to Earth as an example of how life developed, with extremely simple life forms having been around for billions of years. Intelligent life only arrived much later, he said.

“We don’t really know the time scales in which civilizations persist. [Intelligent life only developed] essentially in the last few minutes of the overall evolution of life on the planet. I don’t want to be too negative about this, but… my basic conclusion is that Seti (search for extraterrestrial intelligence) signals will be rare in the Milky Way.”

While Garrett does not expect to hear from aliens in the near future, experts at Seti are more hopeful.

In March, leading Seti astronomer Seth Shostak said he expects to make contact within the next 20 years thanks to advances in technology.

Speaking to Popular Mechanics, he said the search is still in its infancy, and is limited by equipment and money, but believes we are not far off: “My guess that we’ll succeed in the next two decades is based on the fact that with improvements in digital electronics and computers – which are getting better and cheaper, following Moore’s law – we will be continually sifting through the sky faster.

“And you can extrapolate how fast we’ll be able to search, assuming we have the money, in the next decade or two.”﻿