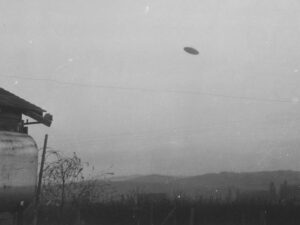 A classic set of impressive UFO photos was taken by Mr. and Mrs. Trent in the early part of the evening, just before sunset, on May 11, 1950, near McMinnville, Oregon.

According to the Trent’s account the object, as it appeared over their farm was first seen by Ms. Trent while she was feeding the farm’s rabbits.
She then quickly called her husband who got the family’s camera and Mr.

Trent then took two shots from positions only just a few feet apart. The pictures first appeared in a local newspaper and afterwards in Life magazine. Seventeen years later the photos were subjected to a detailed analysis for the University of Colorado UFO Project.

William K. Hartmann, an astronomer from the University of Arizona, performed a meticulous photometric and photogrammetric investigation of the original negatives, and set up a scaling system to determine the approximate distance of the UFO.

Hartmann used objects in the near foreground, such as a house, tree, metal water tank, and telephone pole, whose images could be compared with that of the UFO. There were also hills, trees, and buildings in the far distance whose contrast and details had been obscured by atmospheric haze.

Hartmann used these known distances of various objects in the photo to calculate an approximate atmospheric attenuation factor. He then measured the relative brightnesses of various objects in the photos, and demonstrated that their distances could generally be calculated with an accuracy of about +/- 30%. In the most extreme case, he would be in error by a factor of four. He then wrote:

“It is concluded that by careful consideration of the parameters involved in the case of recognizable objects in the photographs, distances can be measured within a factor-four error … If such good measure could be made for the UFO, we could distinguish between a distant extraordinary object and a hypothetical small, close model.” 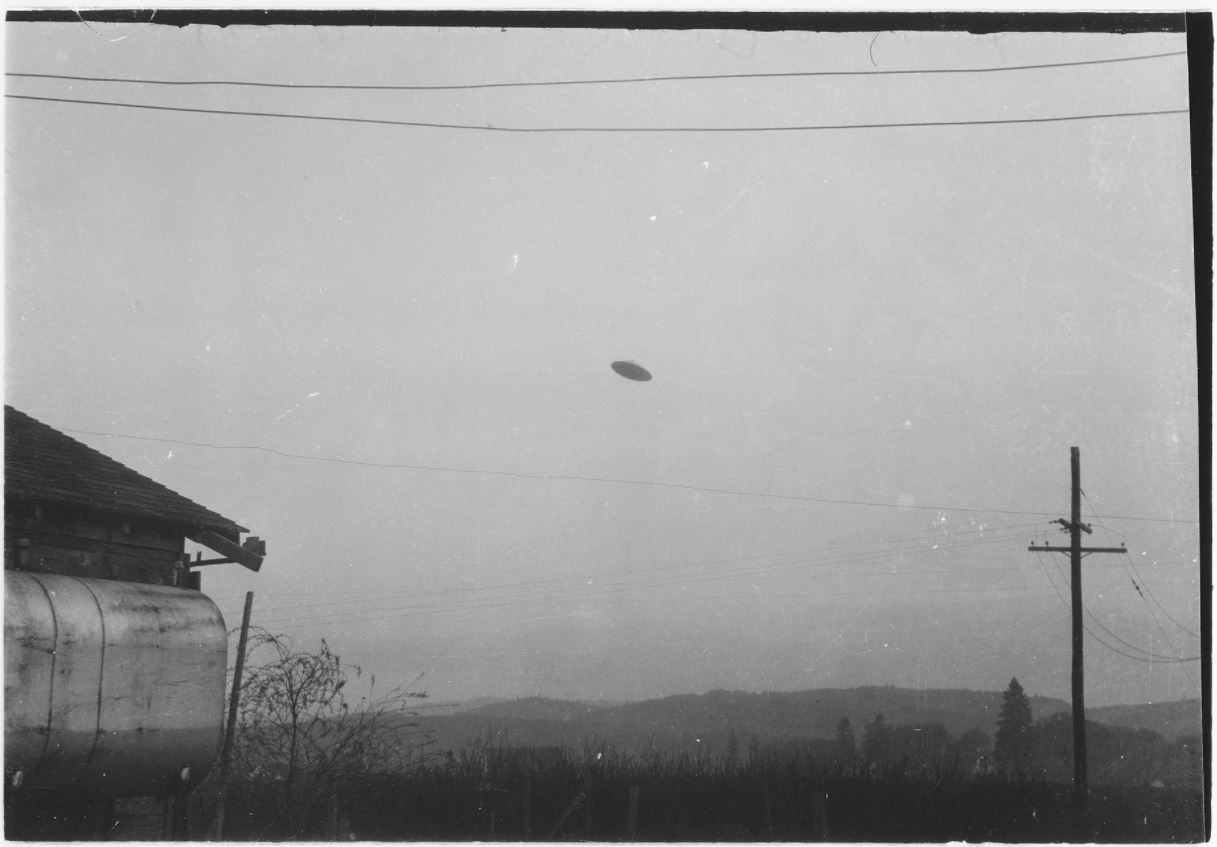 Hartmann then noted that his photometric measurements indicated that the UFO was intrinsically brighter than the metallic tank and the white painted surface of the house, consistent with the Trent’s description that it was a shiny object. Further, the shadowed surface of the UFO was much brighter than the shadowed region of the water tank, which was best explained by a distant object being illuminated by scattered light from the environment.

Hartmann further wrote that “to the extent that the photometric analysis is reliable, (and the measurements appear to be consistent), the photographs indicate an object with a bright shiny surface at considerable distance and on the order of tens of meters in diameter.

While it would be exaggerating to say that we have positively ruled out a fabrication, it appears significant that the simplest most direct interpretation of the photographs confirms precisely what the witnesses said they saw.”

In his conclusion, Hartmann reiterated this, stressing that all the factors he had investigated, both photographic and testimonial, were consistent with the claim that “an extraordinary flying object, silvery, metallic, disc-shaped, tens of metres in diameter, and evidently artificial, flew within sight of [the] two witnesses.”

Not satisfied with Hartmann’s findings and totally devoid of any evidence that the UFO was a hoax and hanging from the wires, UFO debunker Robert Sheaffer argued qualitatively that the haze in the photos (the haze veiled the UFO and led Hartmann to conclude the UFO was about 1.3 kilometres distant) could be due to a “dirty” camera lens, and thus the object could still be close to the camera.

He further argued that shadows on the garage were strong evidence for a large time lag between the photos, and alleged that the shadow positions suggested the photos were taken at 7:30 in the morning rather than in the evening (the image on the left depicts the edge enhancement technique which, under typical conditions, can reveal the presence of a wire less than a quarter of a millimetre thick at a distance of up to 3 metres).

Dr. Bruce Maccabee, an optical physicist, analyzed the original negatives and found no support for Sheaffer’s time lag claim. He also repeated Hartmann’s calculations in much greater detail, including corrections for lens grease and obtained about the same results as Hartmann originally did. (One other important aspect of Sheaffer’s dirty lens hypothesis is that it fails to explain why it didn’t affect all objects in the photos, and not just the UFO.

All the nearby objects in the photo were all sharp with high contrast, but the objects in the distance such as a barn, a house, trees, and hills (and the UFO), were of low contrast, exactly as would be expected from absorption and scattering of light.)

Maccabee calculated the UFO to be over 1 kilometre away, and about 30 meters in diameter and 4 meters thick.

Regarding the alleged reported time the photos were taken which, according to Sheaffer, would be inconsistent with the position of the shadows on the photos, Maccabee discovered that the garage shadows could only have been caused by a diffuse light source, rebutting Sheaffer’s argument.

Maccabee suggested that a bright cloud illuminated by the evening sun could possibly have caused them. Moreover, neither Sheaffer nor Klass has provided a plausible cause as to why the Trents would have lied about this, especially since it is immaterial to analysis of the UFO’s distance.

In his book “UFOs Explained,” Klass argued that the Trents were “repeaters,” citing a story published in the Portland Oregonian June 10 in which Mrs. trent is quoted as saying to reporter Lou Gillette that “she had seen similar objects on the coast three different times but no one would believe me.”

Klass further quotes from a newspaper article written about 17 years later, in which she is quoted as saying “We’ve seen quite a few since then but we didn’t get any pictures, they disappeared too fast.”

Klass indictment of “repeater” is based solely on Mrs. Trent’s claims as reported in the paper. Assuming the account is accurate, an important detail however, is that Mr. Trent apparently did notagree with his wife. For reasons we can only guess, Klass did not include in his book Mr. Trent’s response to the following question (story in the June 11, 1950 L.A. Examiner):

“why [did you wait] so long before telling anyone about [the photos]. Trent admitted he was ‘kinda scared of it.’ He said: ‘You know, you hear so much about those things… I didn’t believe all that talk about flying saucers before, but now have an idea the Army knows what they are.”

This suggests that Mr. Trent had not seen any UFOs before and was skeptical about flying saucers (hence his wife’s claim that “no one would believe me”)… until he saw one himself.

One get’s into a logical muddle here. If, as Klass believes, there are no saucers and therefore the Trents couldn’t have seen one, then Mrs. Trent must have been lying when she said she saw several previously.

On the other hand, Mr. Trent was telling the truth about his skepticism, although he could well have supported his wife’s claim by saying that he too had seen several even if he really didn’t believe they existed.

After all, if it’s a hoax, he could say anything to support the hoax story. One way to get out of this muddle is to assume that they both told the truth regarding previous sightings (Mrs. Trent had several, Mr. Trent had none and didn’t believe in saucers).

Of course, Mrs. Trent previous sightings certainly could have been honest misidentifications… and if this were so then she wasn’t really “a repeater” unless you classify a person who repeatedly and honestly misidentifies objects as “a repeater” [Maccabee op. cit., private communication].

The McMinnville UFO photographs remain among the best-publicized in UFO history. Skeptics continue to explain the two photographs as being hoaxes and/or fakes Ufologists continue to argue that the Trent photos are credible evidence that UFOs are a real, physical phenomenon.

The Trents have consistently been described as honest, simple farm folk who never attempted to profit from their photographs, nor the notoriety they brought them. Evelyn Trent died in 1997 and Paul Trent in 1998; both insisted until the end of their lives that the sighting, and the photos, were genuine.