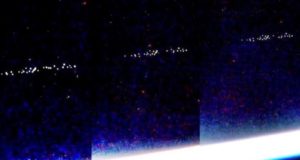 More and more people all over the world are starting to notice massive UFO formations flying past our planet, reports ufosightingshotspot.blogspot.com.

So also Gorden Mckenna, while watching NASA’s live feed cam on April 2, saw a fleet of UFOs flying past the International Space Station.

The first wave of UFOs and unknown space anomalies/debris appeared in February through the first week of March. This fleet of UFOs is part of the second wave that started a week ago and is just one of the many formations that fly by.

Just like the first wave, this second wave also comes from the same direction, indicating that there is something going on in deep space that forces all these UFOs to move to other locations.

It is, of course, difficult to determine what could be the reason for the displacements of all these UFOs but one reason could be that there is a space war going on.

Another reason could be that a huge devastating celestial body is the cause of the UFO displacements, since the live cam also shows countless unknown anomalies what looks like debris that fly by, which suggests that these anomalies may come from such a celestial body.

Whatever the reason, it’s something to keep an eye on.