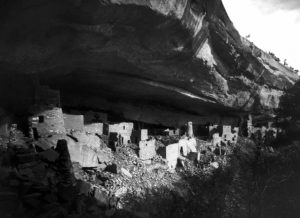 Massacre cave located in Canyon De Chelly in Chinle, Arizona is the landmark of a terrible battle fought between Spanish soldiers and Navajo people. In 1805 a group of Spanish soldiers happened across Navajo hunters in the canyon.

Taking the advantage while the men were away they attacked the remaining of the Navajo people of that tribe. Women of the group saw the Spanish soldiers coming and the people hid in Massacre Cave, located over 1,000 ft up the canyon wall. The cave was only accessible from the bottom and so the group was showered in a barrage of bullets from the Spanish. Bullet holes still remain in the walls of the cave from that fateful day that would end in the deaths of over 115 Navajo, including women, children and elders. Some of the Spanish soldiers made their way up the canyon to the cave while the others relied on their rifles, however the Navajo would not be had easily and met each Spaniard who made it to the cave with hand-to-hand combat. One location in the cave was named “the place where two fell off” as it was there that a Spaniard and Navajo woman fell down into the canyon to their death while engaged in hand to hand fighting. Although it was not uncommon for there to be war between the Navajo people and other invading cultures in that time, the Massacre Cave location marks a particularly deadly battle for the Navajo and a dirty deed by the Spaniards.

There have been reports of screams, moans, and other noises coming from the canyon at night. Some have also reported the sounds of horses, and occasionally there are reports of gunfire from within the canyon.

The first thing that comes to mind for me is that this is not only an outdoor location ( which means little to no credibility when looking for auditory phenomenon ) but also a canyon which presents its own unique set of barriers when it comes to collecting clear sound data. There are a number of animals who inhabit canyons that could make sounds similar to nearly all of those mentioned.

However, it is fact that over 115 Navajo individuals brutally and suddenly lost their lives. There are confirmed children among the dead as well which I feel should be noted. Most important in this case is to take a look at Navajo beliefs on death, afterlife, and spirituality. While many are aware that Native American traditions are generally fascinating and full of insight, it can also be said that they are greatly varied from one culture to another and should never be generalized.

In Navajo tradition, a ghost is called Chindi, and is believed to be the dead person’s last breath… and exhalation of everything that was bad within a person, or the residue that the person cannot take with them to the next realm. It is believed that the Chindi will remain around a dead person’s possessions or bones and can make the living quite ill if they come into contact with them. This illness is often referred to as “ghost sickness” It is believed that if a person dies outside the Chindi will disperse, and not become a ghost. In fact, if a person were to die in their home or hogan as they were called, it would be torn down and the family would move to another.

Judging by Navajo beliefs on the afterlife it is unclear if would consider Massacre Cave to be haunted. After all, the dead did lose their lives outside. However, their bones would have remained until uncovered and removed by archaeologists for examination. An article in a Utah newspaper shows exactly this and the dismay of the Navajo people that the bones of their ancestors from Canyon De Chelly had been exhumed along with funerary items and taken away from the location by archaeologists. The Navajo believed, much in common with their tradition, that sickness would be caused by the removal of the bones, meaning that there is at least to some degree a feeling that the spirits of the dead Navajo remain in the canyon.