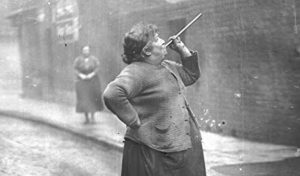 Born in 1865, Mary Smith of Brenton Street, Limehouse, London, ​was in 1931, (the year of the photographs below), one of the many people that earned around sixpence a week as a knocker-upper, someone literally paid to wake up workers in the mornings. Often the trade ran in families, as it did with Mary, who followed in her mothers’ footsteps.

Mary married Thomas Edward Smith in 1884 and they had sixteen children together, but only two survived into adulthood. Mary, woke up her cients by shooting a pea into the windows of the sleeping workers via a pea shooter, and is believed to have been one of Londons last knocker uppers.

Knocker uppers would generally bang on clients doors to rouse them from their slumber, although they also used long bamboo sticks, batons and canes to rouse residents of the upper floors. The knocker-up would not leave their client’s window until they were sure that the client had been awoken.

In order to have a knocker-upper wake you up, you could do one of two things, either put a note on your door saying when you wanted to be woken up, or contact the knocker-upper directly in person and let them know when to bang on your window.

In Londons East End, where life for the employed was forever balanced on a knife-edge, being late for work could mean instant dismissal and a speedy spiral for those workers and their family into poverty, homelessness and destitution.

Those working unusual hours, such as the market workers of Limehouse Fields, employed a knocker-up to make sure they were up in time for work.

Knocker-uppers was mainly a profession in England and Ireland that started during the Industrial Revolution and it lasted at least as late as the 1940s when alarm clocks became both more affordable and reliable.