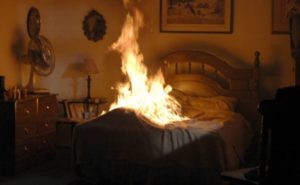 Reports of spontaneous human combustion, where a person bursts into flame with no apparent cause, date back to the late 15th century.

Of the more recent cases however, none has been cited more often than that of 67 year old widow Mary Reeser, in what became known as the “cinder woman” case, who was virtually cremated in her northeast St. Petersburg apartment on July 2, 1951, by a mysterious fire that did little other damage. The case still remains open to this very day.

On the evening of her death Mrs. Reeser was visited by a neighbour and then shortly before her death by her physician son, Richard Reeser. She was depressed because she thought she wasn’t going to be able to travel north for the summer. She hadn’t eaten dinner and told her son she had taken two Seconal tablets and might take two more before retiring. At the time, Mary Resser was wearing a nightgown, bedroom slippers and a robe. When they left her, everything in the apartment appeared normal.

The following morning a telegram courier arrived and received no answer to his knock at the door. Summoning the same neighbour, they found the doorknob hot to the touch. The neighbour asked nearby construction workers (some sources say policemen) for help getting into the apartment. Once inside, they found the apartment unusually warm, even though some of the windows were open.

In one corner of the room they found a pile of ashes, the burnt remains of a chair and lamp, and an electric clock with a melted plug that had stopped at 4:20 a.m. Other than the charred remnants in this corner, the apartment was completely undisturbed. Upon closer examination, they found a woman’s left foot, still wearing a slipper, in the ashes, a skull that had shrunk to the size of a baseball and one vertebra . That’s all that was left of 170lb Mary Resser. 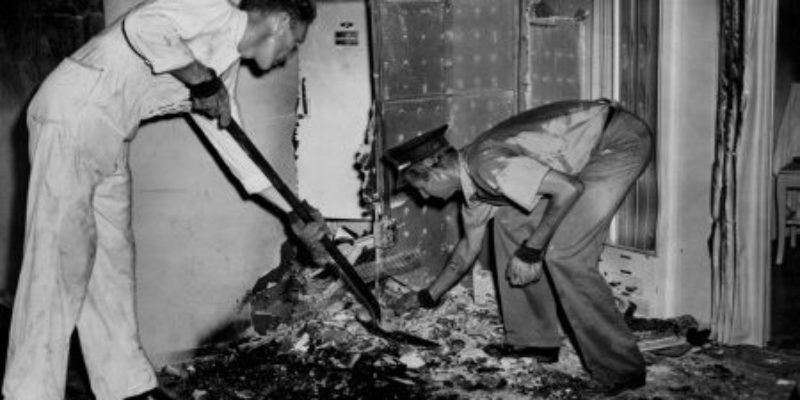 There was no sign of a break-in or a burglary or any other outside influence in the apartment. The authorities were stumped and began to call in consultants to help.

To the experts, clearly this was no ordinary fire. They estimated that a fire of 3,000 degrees burning for several hours would be needed to consume a human being so thoroughly. With a fire that hot, burning for that long, why wasn’t the rest of the apartment, if not the entire building, burned down.

St. Petersburg police solicited the help of the F.B.I, but the Bureau couldn’t shed any light on the situation, and Police Chief J. R. Reichart received an FBI report stating that there was no evidence that any kind of inflammable fluids, volatile liquids, chemicals, or other accelerants had been used to set the widow’s body ablaze.

St. Petersburg Fire Chief Nesbit said that he had never seen anything like it in all his years of investigating fires.

Physical anthropologist Wilton Krogman, a consultant on the case, at first theorised that a “super lightning bolt” might have struck Reeser, her body serving as a conductor to ground the current through a wall-type heater behind the chair. He discarded this theory as soon as he learned that local weather bureau records showed no lightning in St. Petersburg on the night Reeser met her bizarre death., wrote, ”I find it hard to believe that a human body, once ignited, will literally consume itself — burn itself out, as does a candle wick…never have I seen a body so completely consumed by heat.

Krogman remarked that he had never seen a skull so shrunken or a body so completely consumed by heat, if he were living in the Middle Ages, he mused, he would suspect black magic – “This is contrary to normal experience, and I regard it as the most amazing thing I have ever seen…as I review it, the short hairs on my neck bristle with vague fear. Were I living in the Middle Ages, I’d mutter something about black magic.”

Possible explanations have been put forward ranging from ball lightning to explosives. The FBI’s explanation being that the widow fell asleep with a lit cigarette and her own body fat caused her to be cremated…….and the fire retardant chair apparently too if this rather flawed explanation is to be believed, because by end of the fire, not only was Mrs Reeser was gone, nothing remained of the chair but the springs, and the rest of the room being left practically undamaged.