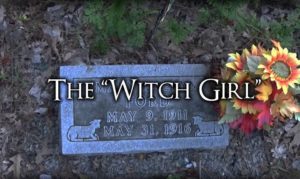 Pilot Knob Cemetery is located in the city of Marion, Crittenden County, Kentucky, and is well known for the legend of being the haunting place of a little girl called Mary Evelyn Ford. The story goes that a five year old girl named Mary Evelyn and her mother, Mary Rebecca Ford, who were both accused of witchcraft, and burned to death at the stake.

After being burned at the stake, Mary Evelyn and her mother were buried in two separate places, although where Mary Rebecca is buried is unknown. The terrified locals were afraid that little girl would come back and haunt them and possibly cast spells on them, so, she was buried in a cemetery at Pilots Knob in a somewhat unusual way. She was buried in a grave lined with steel, and the casket was covered with concrete and gravel. Around the grave, they placed a white metal fence with interconnecting crosses.

It is said that the “little witch girl” will often appear as an average sized five year old wearing a white dress that’s scorched at the bottom, like her blond hair. People say that Mary Evelyn will “sleep” in the daytime, but come nightfall, she makes her presence known. It is said that if you happen to be standing too close, she can reach out and grab you, pulling you into her grave, supposedly giving her more strength.

She is also reported to make faces at people to lure them closer so she can grab them. Many believe that although she can not escape the fence of crosses that surrounds her stone filled, steel grave, Mary Evelyn is looking for her long lost mother. Legend also says that if you lie on her grave, you will be held down, and not let back up unless somebody from the outside pulls you out. It also says that you are not supposed to do this alone, or you will be sucked into her grave with her, thus giving her more power.

“The Watcher” can’t hurt Mary Evelyn, because of the fence around her grave, but whenever anybody comes near, he chases them away. Witnesses report that when they encounter “The Watcher”, a feeling of being watched will come about them, along with a feeling of fear accompanied by goosebumps. Occasionally, people will report that they heard voices or loud, heavy footsteps coming from behind them, usually associated with “The Watcher”.

Its also said that supposedly, when you leave the cemetery, your car will not start, although eventually in most cases they will eventually start.

However, although the legend of “the little witch girl” is very popular, it is also not true. According to Mary Evelyn’s death certificate, she did not die as a result of being burned at the stake, but from peritonitis on May 31, 1916.

Also, her mother, Mary Rebecca Ford, was still living after her daughter’s death, and is really buried in the same cemetery, dying in 1955 at the age of 85 after outliving her husband and at least two of her children. Neither was accused of witchcraft or burned at the stake.