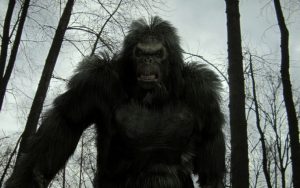 This hairy biped’s fur is two-toned, hence the name, Marked Hominid. Siberians call it Mecheny, Marked One. Read about a respected cryptozoologist’s encounter with one.

Marked Hominids, either solo or in groups, have been sighted in the wooded mountainsides and tundras of Arctic and Sub-Arctic regions of North America, Europe and Asia.

Although their fur usually ranges from reddish brown to black in color and has white patches, witnesses have reported seeing two-toned fur without white patches and some albinos.

These omnivorous creatures are about seven feet tall and have powerful bodies with muscular legs and shoulders. Their arms don’t reach below the knees. Their heads, with large glowing eyes, rest low, so it appears as though they have no necks.

The cryptids’ rounded faces aren’t ape-like. The feet are between ten and fourteen and a half inches long, three to five inches wide, with toes that are generally splayed.

Marked Hominids often emit a very strong odor that some say is similar to that of a wet dog.

They are nocturnal, howl and sometimes wear other animals’ pelts. The cryptid’s diet includes large and small game and plants.

Marked Hominids have been reported to approach villages of native people. Allegedly, the creatures have been known to trade with humans, communicating by hand gestures.

Maya Bykova, who had researched Yeti for twenty-five years, met Volodya on a train while she was returning home from a trip to gather information about hairy hominids.He told her he had a hunting cabin in a remote area in western Siberia.

His grandfather, father and he had seen Mecheny. The hominid resembled a man, but was covered with reddish brown hair, except for the white hair on his left forearm. The hairy biped announced his arrival by knocking on the window, then wandered about mumbling to himself. Volodya invited her to the cabin.

On August 15, 1987, Maya, Volodya, wife Nadya and their dog, Box, went to the cabin. Volodya put logs with a piece of plywood on top so, if Mecheny showed up, they wouldn’t be surprised by his knocking.

At dawn, they heard someone step on the plywood and knock on the window twice. Maya ran out of the door and saw the creature.

Mecheny was covered with fur, as Volodya had described, and had glowing red eyes. He was about six and a half feet tall. Mecheny glanced at each person and made a soft sound like khe. The legs were like a human’s, not an ape’s. There was no neck.

His arms were hefty and about the same length as a humans. The encounter lasted about a minute before Box ran out from behind the cabin, howling and barking. Mecheny turned, walked behind a tree and disappeared into the forest.

Enigma of the Marked Hominid

The first and most perplexing and compelling question is, that if it’s true the creatures have had contact with humans, why haven’t scientists and/or cryptozoologists gone to the areas where the encounters were reported in hopes to capture at least one of them or to take pictures, collect hair and scat samples and make casts of footprints?

No such expeditions were found during extensive research.

In 1961, cryptozoologist Ivan Sanderson published Abominable Snowmen: Legend Comes to Life about the varieties of hairy hominids. Since then, there have been more research and books and articles written.

The evidence for the hairy bipeds’ existence consists of numerous universal sightings, casts of footprints, scat, hair, photographs and the controversial Patterson-Gimlin film.

It’s amazing that no hairy biped has been captured or killed and no genuine corpse has been found. Could it be that these cryptids, if they exist, are so intelligent that they elude and destroy scientific evidence of their existence?