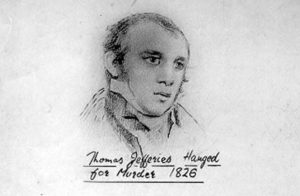 Mark Jefferies was a notorious bushranger, serial killer and cannibal in the early 19th century in what was then known as Van Diemen’s Land, but now Tasmania, and ranks alongside Alexander Pierce and Mad Dog Morgan as one of the most infamous criminals in Australia’s colonial history.

Jefferies was transported as a convict from Scotland, having being granted a reprieve from death as he was willing to act as an executioner and scourger. Arriving in Van Diemen’s Land on October 21st 1823, he took to the bush, and a terrible story of crime ensued until he was finally captured and executed.

Having arrived only 8 months previously, he was sentenced to 12 months in Macquarie Harbour, the penal settlement on the colony’s west coast in June 1824 for threatening to stab Constable Lawson. By August 1825 he had been appointed a watch house keeper and flagellator (flogger) at Launceston Gaol, which would have suited his sadistic personality.

Jeffries was a violent sex offender, and on 25 August 1825 was fined half of his salary for falsely imprisoning and assaulting a woman, and in October he was fined 20 shillings for taking a female prisoner out of the watch house.

On 31 December 1825, Jeffries and three convicts, Perry, Russell and Hopkins, escaped from the Launceston Watch House. He was one of just six convicts known to have successfully escaped from Macquarie Harbour by land.

They subsequently robbed the hut of a Mr Barnard, then broke into the house of a settler called Tibbs, about five miles from Launceston. Tibbs’s wife and five-month-old child and a neighbour called Basham were at the house. When they tried to tie the men up, they resisted and Basham was shot and killed, and Tibbs wounded.

The bushrangers left, taking Mrs Tibbs and the baby. When Mrs Tibbs could not keep up, Jeffries grabbed the baby and bashed the infants head against a tree, killing it. The baby’s remains, which had been partly eaten by animals, were discovered about a week afterwards in the bush. Mrs Tibbs returned home on Sunday afternoon.

The newspapers are coy about her state, but it is likely she had been raped. According to Mrs Tibbs, Jeffries was calling himself “Captain”, and was dressed in a long black coat, a red waistcoat, and a kangaroo skin cap.

During their escape from Launceston, the four convicts ran out of food, whereupon they turned on Russell, killed him and ate his body. When asked what he then did with the remainder of Russell’s corpse, Jeffries said it was cut into steaks and fried up with the mutton from a sheep they stole.

On 11 January 1826, Jeffries shot and killed Magnus Baker, a constable from George Town, and for a brief period Jeffries ran with Matthew Brady’s gang, but Brady, who was unfailingly chivalrous to women, could not tolerate his sex crimes, and expelled him, calling him “a de-humanised monster”.

Jeffries was captured on 23 January 1826 at South Esk without a fight. When he was brought to Launceston the population turned out to lynch him. Safely in jail, he willingly told the authorities all he knew of the locations, movements and habits of other bushrangers.

When Matthew Brady heard about this he had to be argued out of leading his gang in a frontal assault on the Launceston lockup, freeing all the prisoners, dragging Jeffries out and flogging him to death. Jeffries was hanged on 4 May 1826 at the old Hobart Jail alongside Brady on the infamous six-man scaffold. Brady complained bitterly about being executed in such poor company.