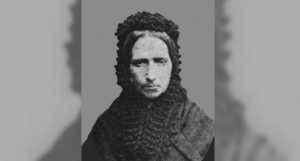 Maria Catherina Swanenburg was a Dutch serial killer, who murdered at least 27 people but was suspected of killing more than 90.

Maria was the daughter of Clemens Swanenburg and Johanna Dingjan, and they lived in the poorer outskirts of Leiden. When she was old enough, Maria began looking after the local sick people, washing them, doing their shopping and general housekeeping chores. This earned her the nickname locally as Goeie Mie, also spelt as Goede Mie in modern Dutch (which translates as Good Mee).

After her first two daughters died at a young age, she married Johannes van der Linden on 13 May 1868. The result of this marriage was five sons and two daughters. The marriage lasted until 29 January 1886.

It was established with certainty she poisoned at least 102 people with arsenic of which 27 died between 1880 and 1883. The investigation included more than ninety suspicious deaths. Forty-five of the survivors sustained chronic health problems after ingesting the poison.

However, the caring nature she had previously displayed would turn instead to murderous greed. Her first victim was her own mother in 1880, and shortly after this, she killed her father too.
She began with killing the elderly and those in poor health, poisoning them with arsenic. She would make sure to insure them in the guise of money for funeral expenses.

That money she would later collect, often leaving them without the means to be buried. Swanenburg grew bolder over time, as the money she managed to collect didn’t seem to be enough. She turned to poisoning whole families – men, women and children included. After they were dead, she would collect their inheritance, using the excuse that she had helped take care of them to justify it.

Not all of Swanenburg’s victims died from her attempts at poisoning, some unfortunate souls were left permanently damaged from the experience. It was some of these survivors that would eventually result in the killer being discovered.

The investigation of her crimes looked into more than 90 suspicious deaths and lasted more than eighteen years. It was established with certainty she poisoned at least 102 people with arsenic of which 27 died (16 of those were her relatives) between 1880 and 1883.

The investigation included more than ninety suspicious deaths. Forty-five of the survivors sustained chronic health problems after ingesting the poison, but many of them were crippled for life. For decades Goeie Mie’s poisoning victims could be seen navigating about Leiden on crutches.

Her motivation for her crimes is usually given as money, yet although she insured her victims before murdering them with poison, she never spent the money she gained from the deaths. She was finally caught when trying to poison the Frankhuizen family in December 1883. 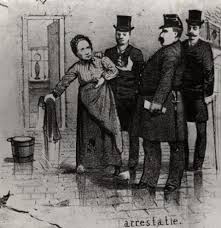 The case came before the Criminal Court of the Hague on April 23 with the prosecution saying “The prisoner is a woman of 46, She is married and has several children. Since 1869 she has attempted to poison no less than 103 persons, and she tried to poison everybody who came in her way.

It is proved, that she killed twenty-seven of her victims and that forty-five others became dangerously ill. Six times she endeavoured to poison one of her sisters-in-law. The prisoner, however, is indicted for murdering three persons only.

The Public Prosecutor maintains that the motive of the criminal was the obtaining money, which insurance societies would have to pay in case of illness or death. Van de Linden made her intended victims members of these societies, sometimes without their knowing it, and in such cases paying their contributions. It is certain, however, the woman poisoned several people whose illness or death could be of no pecuniary benefit to her.

The prisoner has been carefully examined by three eminent medical men, who certify her sanity. The events on which the trial is based took place in 1881 and 1883, and during this time she tried to kill 20 persons.

The poison which she used was arsenic, which she mixed with the food or drink of her victims, and the drug was found in the bodies of some of them. There are in all about fifty-four witnesses who have been or will be examined.

The prisoner is a pale and ugly woman, with no expression of intelligence. At the close of the evidence to-day the prisoner, who at first strenuously denied the crimes with which she was charged, confessed the facts which form the subject of the prosecution, but she denies that she had any pecuniary motive, and it is thought that she may have committed these atrocious crimes when intoxicated”.

At the opening of the poisoning trial on April 24th she fainted and the court had to be adjourned for an hour. On the resumption of the trial she confessed to two of the murders, but alleged that she did not intend to kill the people. The public prosecutor then addressed the Court, and asked the Judge to pronounce a sentence of imprisonment for life.

M. Vaillant, the prisoner’s advocate, in reply, contended that the case had not been legally proved, but admitted that the prisoner was a monster, suffering from moral insanity.

A remorseless Maria Swanenburg was found guilty of the murder of her last 3 victims and sentenced by the judge to life in prison, where she died in 1915, at the age of 75 having served 30 years.