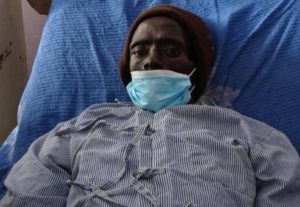 What exactly happened the other day in a small Kenyan hospital is still difficult to say. Was there really an incredible resurrection from the dead or was it medical negligence? The patient himself believes that it was God who brought him back to life.

32-year-old Kenyan resident Peter Keegen passed out at home on November 24, 2020. He suffered from an unnamed stomach ailment and may have had an exacerbation of the disease.

When his family called an ambulance and they took him to the Kapkatet hospital in the Kericho area, he never recovered and was pronounced dead.

Keegen’s body was transported to the morgue room and left there for three hours before the morgue workers were supposed to arrive and begin the embalming procedure.

When they arrived, Keegen’s body still looked completely dead. One of the workers began to cut Kigen’s leg to inject formalin into the tissues of the body, and only then the man suddenly woke up and began to move, groan and cry in pain.

The morgue workers were terribly frightened, deciding that they were in front of a zombie or something other supernatural, and hastened to leave the morgue.

When they returned, they took Keegen to the intensive care unit. Later, when it became clear that nothing threatened his life, the patient was transferred to a regular ward.

Now Peter Keegen willingly gives interviews to journalists and says that he is incredibly happy that he has come to life, and that now he will devote his life to serving God. His family, meanwhile, accuses the hospital of medical negligence, not believing in the miracle of resurrection from the dead, but believing in the mistakes of the staff.

Keegen is in satisfactory condition and may be discharged in a few days.