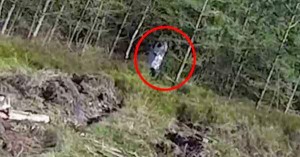 In The United Kingdom, the epicenter of the black-eyed children story is the Cannock Chase forest.

Based to paranormal experts, it’s the most haunted forest in the country.

Earlier this month, a YouTuber was flying his drone over the forest when he saw movement in the trees on the live video feed. Convinced it may be someone in trouble, he immediately maneuvered his drone in for a closer look.

What he saw instead is the stuff of nightmares.

“Now that’s terrifying. I firmly believed that black-eyed children were 100% fake, but after this…well, I’m not sure what to think. It’s also possible that what the drone captured was a lost child or hiker. Still though, I don’t think I’ll be visiting Cannock Chase anytime soon. ”