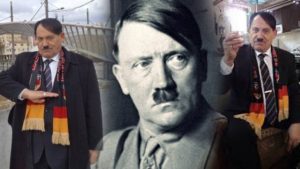 Of all of the individuals that one might be interested in to relate for a reincarnation, Adolf Hitler would probably never make the list. After all, who would want to be associated with one of the most hated men in history? Who in their right minds would even consider listing his name as someone with whom you say that you share memories?

But this is not the case for a 52-year old man that shares a canny resemblance to Adolf Hitler. For Emin Djinovci, it is one of the realities that he lives with.

Djinovci swears that he is Hitler reincarnated. He is Kosovan-born and carries a copy of Mein Kampf with him at all times, which is Hitler’s autobiography. He moved from Germany to Kosovo in 1998 as it is against the law in Germany to glorify anything having to do with Hitler. He has five daughters who he has named ‘Hitler’s Children’.

The man seems to be quite proud of his likeness to Adolf Hitler and he shares the same hatred of their common enemy. He as well as Hitler had a dislike for the Serbs and Djinovci was involved in the Kosovo War. He doesn’t make any apologies for his hatred for the Serbs, quoting the famous line ‘The enemy of my enemy is my friend’.

He is listed as the Kosovan reincarnation of Adolf Hitler and often poses for £60 for tourists to take his picture. One might assume that this was all being done as a gimmick or scam, but Djinovci insists that it is real.

The details that he includes regarding the former Nazi leader, as well as his incredible sense of pride in the resemblance, were so strong that it prompted him to leave and move to Kosovo. If there was ever someone that one wanted to make money on with a scam, Hitler would be the last on the list.

Djinovci joins many people around the world that indicate they have memories of past lives and that they are reincarnated. A majority of these people are children and after they begin to age, they start losing the memories that they seem to hold dear. It is a rare situation where an adult retains the stories and memories.