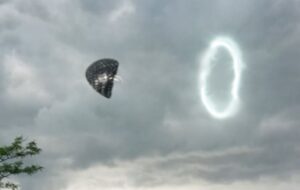 A baffled senior citizen who loves stargazing was left speechless after claiming to have seen a UFO hovering above his house, reports lancashiretelegraph.co.uk.

Ian Gibbons, from Colne, said he saw the UFO emerge from what he described as a ‘portal’ when gazing out his patio window a few weeks ago at about 6.30pm.

Mr Gibbons, 72, described it as “just like something out of a sci-fi movie,” but it disappeared before he could react.

He said: “On a good night Mars and Venus can usually be seen from where I live, we’ve got great views out over the countryside, and on this particular night the sky was clear and Venus had just appeared.

“I’m not into stargazing in a big way, I just like to look out of the window and admire the sky, so I went to the patio and had a look out and all of a sudden this UFO came out of a portal – it was red and orange and circular.

“I grabbed my binoculars and got a good view of it while it hovered for a few seconds, but in the wink of an eye it shot up into the sky and then sped off towards Skipton.”

“I do believe someone over in Barnoldswick saw it as well. It was on February 22.

“It definitely wasn’t a plane or someone shining a light – I had a fantastic view of it, it was like something out of a sci-fi movie”, he said.