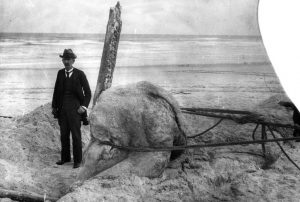 The Lusca, a half-shark, half-octopus, man-eating cryptid, terrorized people around the Bahamas for decades. Did one’s corpse wash up near St. Augustine?

On a November 1896 evening, two men were bicycling along the shore near St. Augustine, Florida when they saw a huge carcass that was twenty-three feet long, eighteen feet wide, four feet high and appeared to have multiple appendages.

They told Dr. Dewitt Webb, founder of the St Augustine Historical Society and Institute of Science, about their discovery. He examined the corpse. Was it a legendary cryptid – the Lusca?

The Bahamian island, Andros, has an array of what the natives call blue holes, formed during the prehistoric Ice Ages. Researchers discovered that they are an immense network of underwater caves, linking Andros’ lakes with the Atlantic Ocean.

According to legend, the Lusca, a hybrid octopus/shark, lives in and near these holes. These ferocious cryptids are said to be seventy-five to two hundred feet long, have a shark’s sharp teeth and octopus-like tentacles.

Some of the few eyewitnesses who survived Lusca attacks agree that the aforementioned description is accurate; others insist that this cryptid’s appearance is more like a squid/eel creature.

Witnesses claimed they saw fishermen’s’ boats swiftly being sucked beneath the surface by the blue holes and saw flotsam of these damaged boats rise to the surface.

Webb photographed the silvery-pink hued creature’s body and procured samples. He noted that the three and a half inch thick skin was axe-proof and estimated that the body weighed about six or seven tons. It took four horses and a team of people to drag it forty feet from the beach to keep the body safe from the waves.

Webb was convinced it was a type of unknown giant octopus, so he sent letters describing the carcass to many prominent scientists, including Professor Verrill at the National Museum, now, the Smithsonian, in Washington DC. Verrill initially said the creature was a squid. 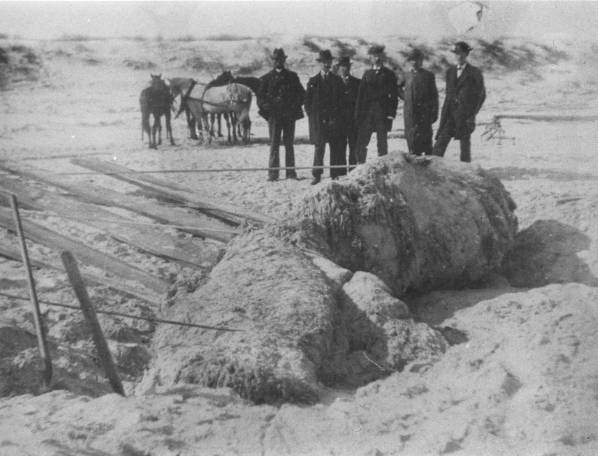 When Webb sent him more information, he said it was an octopus. The professor refused to personally observe the corpse or provide money or resources to help preserve the body. He named the creature after himself, Octopus Giganteous Verrill.

He changed his mind again after receiving tissue sample and said the body was probably a sperm whale’s head. Webb preserved as many samples of the corpse as he could before the sea washed the body away.

Over fifty years after the corpse’s discovery, Dr F.G. Wood and Dr J.F. Gennaro Jr., discovered news items about the St Augustine sea monster in old newspaper clippings. They were able to obtain samples that Webb sent to Verrill.

When the scientists examined the samples, they were able to deduce that the body was one of an enormous octopus, evidencing Webb was correct.

Squid and octopi are cephalopods, a type of predatory mollusks. Tales of giant cephalopods have been told for centuries, but it’s only in the last one that scientific records have been kept. 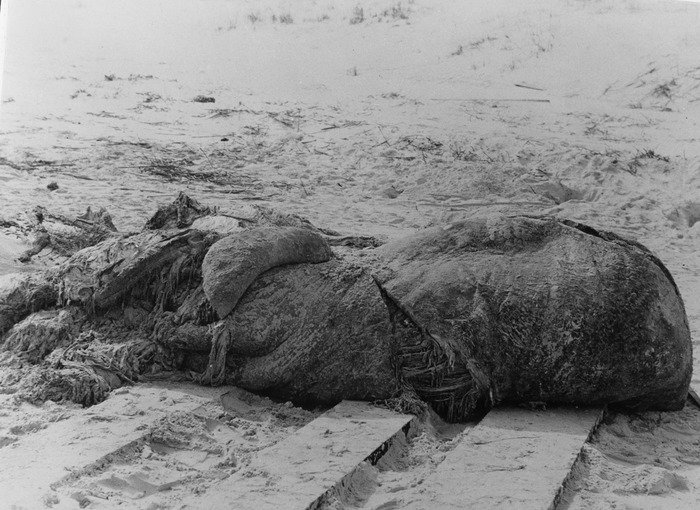 French fishermen recently claimed they were attacked by a many-legged sea creature. Marine biologists are constantly finding remains of squids which are larger than the previous ones.

Currently, the largest giant squid was found in Antarctic waters in April 2003. The cephalopod was immature, but was about fifty feet long.

Lusca and Other Sea Cryptids

What could the St. Augustine sea monster have been? The marine biologists theorized that it was a huge octopus. What about reports of the Lusca attacking fishermen’s boats near the blue holes?

Some oceanographers postulate that what people are mistaking for these attacks may be a natural phenomenon caused by swift tidal changes which suck the water back into the blue holes, resulting in whirlpools that have the potential to pull swimmers and boats into their depths.

When the currents reverse, a surge of water gushes back into a pool, which could force wreckage to the surface. While this theory might apply to some cases of mysterious disappearances, it doesn’t account for the immense tentacles and shark-like appearances witnesses describe.

The late Dr. Bernard Heuvelmans earned a PhD in zoological sciences and is known as the Father of Cryptozoology. His work was respected by the scientific community because his research was based on scrupulous adherence to the scientific method and he had a substantial background in zoology. He classified water monsters in his 1968 book, In the Wake of Sea Serpents.

The Times of London reported that the HMS Daedalus crew encountered a sea monster on November 10, 1901 in the South Atlantic. The serpentine creature was approximately sixty feet long and about fifteen inches in diameter, with its head raised four feet above the water. It remained in sight for about twenty minutes.

Sailors reported seeing huge multi-tentacled sea monsters since ancient times. Norwegians called them Krakens. In the early days of the age of science, the idea of a Kraken was ridiculed, placed into the same category with mythical sea serpents and ignored by scientists.

The only evidence was beached carcasses. When several carcasses of the beast washed ashore, scientists were forced to acknowledge that Krakens could be reality.

There’s controversy about the size of the giant squid. Witnesses’ sightings and sucker scars on whales seem to evidence there are squids much larger than beached carcasses indicate.

Skepticism about giant squids’ existence has weakened. Some scientists theorize the Antarctic species of squid, Mesonychoteuthis hamiltoni, is much larger than the known giant squid.

Perhaps, one day, a Lusca or other sea creature will be captured and the animal will be removed from the speculative science of cryptozoology and put into the realm of zoology, joining the ranks of living fossils, such as the coelacanth, a fish, and the tuatara, a four-legged lizard-like reptile.