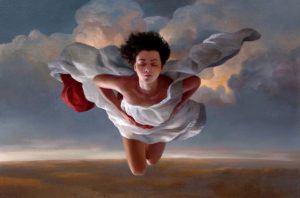 Lucid dreaming, when the dreamer is aware of dreaming, can be used to produce psychological and physical conscious benefits.

When most people are inspired by a dream, they pull out a thumbed-through copy of one of the thousands of dream interpretation books. The doors have recently opened to a new school of thought which offers methods for people to actually realize that they are dreaming, thereby enabling the individual to take control within the dreams.

The Nature of Sleep

To comprehend dreams, one must first understand the structure of sleep. Basically, sleep has been measured with respect to depth being represented by the patterns of brainwaves as seen on EEG recordings.

According to Stanley Coren’s 1996 book Sleep Thieves, the first stage of sleep ranges from wakefulness to drowsiness to sleep. During this transition phase, people can show some responsiveness to stimuli such as moving a limb in response to hearing a predetermined noise.

The second stage is light sleep from which people can still be easily awakened. Stage 3 is moderately deep slow wave sleep and Stage 4 is deeper (with greater voltage swings) and slower waves still. A typical 90-minute sleep cycle goes from light to deep and back to light followed by dream sleep (REM). Dream sleep usually constitutes 30% of sleep time.

The History of Dreams

Explanations of the nature and functions of dreams have varied tremendously throughout time. In primitive times, some offered that a distinction between the “real” world and the dream world was indistinguishable.

Subsequently, religion took over and dreams were thought to be sent from the deceased or gods. The people believed dreams could predict the future and were to be used for decision making about life and one’s life course.

More recently, with the assistance of technological advances, emphasis has switched to focusing more on the physiological, information processing, cognitive and memory functions of dreaming. Interestingly enough, as thought centuries ago, lucid dreaming has indeed shown that people can tailor their dreams towards decision making and changing lifestyles.

Many readers may have experienced a particular type of dreaming known as lucid dreaming. This occurs when one is dreaming and actually becomes aware that this is the case. The goal of lucid dreaming is grand indeed.

It is thought that with the awareness one is dreaming (shown by predetermined eye movements), one could take the next step toward taking control over the dreams. Research by Alan Worsley appearing in Conscious Mind, Sleeping Brain, has indicated that this is indeed possible.

As La Berge stated in his 1985 book Lucid Dreaming, “The fact that lucid dreamers know they are asleep, can remember to perform previously agreed-upon actions, and can signal to the waking world, makes possible an entirely new approach…”

The first step in learning lucid dreaming is to perfect the ability to recall one’s dreams. Get plenty of sleep as dream periods become longer as sleep proceeds throughout the night. Before sleep, the individual should tell himself that he will recall his dreams.

Then, one must become accustomed to keeping a dream journal. Write down all every dream detail that can be remembered by rebuilding the story and repeatedly ask what event or image led to the subsequent one.

People are likely to recall more dreams and one may be able to determine that he/she is dreaming during the actual dream. It is then time to explore, view and assert control over one’s dreams guiding them in the ways chosen to obtain transferable desired outcomes.

Individuals who have practiced lucid dreaming claim they have been able to greatly reduce psychological distress, depression and anxiety. LaBerge recommends that one should learn to control his actions rather than the dream itself.

For example, if one is fearful of a boss who appears as a monster in a dream and he realizes he is in a lucid dream, it is better to view himself acting assertively with the monster rather than changing the monster into a small animal.

This latter will do little in one’s actual life when again forced to deal with the boss for he is unlikely to turn into the changed image. However, the strength and courage derived when one behaves in a strong, assertive manner is much more transferable to one’s real life.

Lucid dreaming, with appropriate focus, appears to be linked with improvements in physical health as well. Successful lucid dreamers report they feel more at one with themselves and derive a greater sense of control over their lives.

Lucid dreaming is still a fairly new subject of study and offers myriad avenues for exploration. With more and more people being drawn to this interesting phenomenon, much more valid and useful information is eagerly anticipated.

What Are Dreams Made Of?

How To Lucid Dream: Tips and Techniques