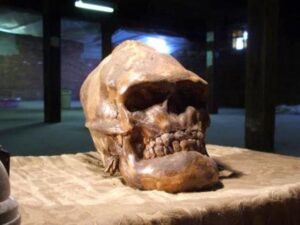 A famous discovery of oversized human remains was first reported in 1911, when miners harvesting bat guano at Lovelock Cave (about 80 miles northeast of Reno, Nevada) discovered the skeleton of a large mummified human skeleton.

The unusual thing about this particular find, besides its excessive height and the extraordinarily large human skulls, was the fact that the remains showed evidence of red hair and was unlike any Indian known to have lived in North America. As the workers continued mining past the four-foot level, they continued to discover mummies.

A mining engineer and amateur archaeologist, John T. Reid, immediately reported the discovery to numerous colleges and institutions, including the University of Pennsylvania and the Smithsonian Institution. He offered them the opportunity to examine the artifacts as they were being removed from the screens of the mining equipment.

A written report by James H. Hart, the first of two miners to excavate the cave in the fall of 1911, recalls that in the north-central part of the cave, about four feet deep, “was a striking looking body of a man “six feet six inches tall.”

His body was mummified and his hair distinctly red.” Unfortunately, it was over a year before the University of California sent a “non-professional observer,” by which time the miners had all but disposed of nearly all the bones and other related artifacts.

These remains served to substantiate the legends of local Piute Indians of Northwest Nevada. They, for generations, have spoke of giants existing in the earlier times. They called them the Si-Te-Cahs. In 1883 Sarah Winnemucca Hopkins, in her book “Life Among the Piutes”, records these legends of the Piutes.

Further, records of Red Haired Giants and Runic Mysteries are inscribed on rocks throughout this region. “Si-Te-Cah” literally means “tule-eaters” in the language of the Paiute Indians.

Tule is a fibrous water plant. In order to escape harassment from the Paiutes, the Si-Te-Cahs were said to have lived on rafts made of tule on the lake.

Another “observer” who had come later from New York, had accompanied the first man in his observation of the site. What became especially puzzling was that these men went out of their way to avoid examination of the bones, and at one point, even insisted on the reburial of a complete skeleton that had just been unearthed.

Instead, they focused their investigation primarily on pottery shards, fragments of basketry, and the like. It is no surprise that it took 17 years, in 1929, before their findings were published, and then, only in a small article from California.

Understandably, Reid became disillusioned with the establishment, and began to document the discoveries as best he could.

Many of the testimonials he collected, as well as his personal memoirs, and some baskets and beads from the area can be found in the Nevada State Historical Society library and museum at 1650 North Virginia Street, Reno, NV 89503.

After the refusal of “establishment science” to make a serious investigation into the matter, local Lovelock residents set up makeshift exhibits of the more impressive finds. As has been the case many times with priceless relics of our past, a devastating fire at one of these displays ended up destroying much of what remained.

There have been reports of other oversize skeletons turning up in the area. Skeletons were found in February and June of 1931 in the Humboldt lake bed near the cave. One of these was said to have been wrapped in an Egyptian-like gum-covered material and was about eight and a half feet tall, while another, stood nearly ten feet tall.

Another report in the 29 Sep 1939 Review Miner tells of a seven-foot-seven-inch skeleton that was found on the Friedman Ranch in the vicinity.

As a result of the long series of battles that took place in the area, there may still be quite a few undiscovered finds that would be superficially buried, especially in the area of Carson sink, specifically around the south shore and near Pelican Island.

Also, a few miles southwest of Lovelock along the railroad, near Perth, is a gravel pit that has yielded artifacts and mummies. Local Indians claim that artifacts have been found in caves near the Pyramid Lake Reservation about 55 miles to the west.

According to Reid, Indians had told him of petrified giants they had found lying in the open wilderness area to the south of Lovelock Cave. In fact, the local Piute Indians spoke of a race of red-headed giants and the bloody conflict that their forefathers had pursued against them.

So ferocious was the Piute abomination toward these Si-Te-Cahs, or “lanky redheads,” that a collective crusade to wipe them out was organized by local tribes that were normally at odds with one another.

A book published in 1882, Life Among the Paiutes, written by Sarah Winnemucca details the strange legends of red-haired giants who had come to the area by boat, apparently when the area was an inland sea.

Twenty nine years later the cache of oversized skeletons and artifacts in Lovelock Cave were discovered. As is usually the case, these “legends” were scoffed at by the “authorities” until hard evidence began to show up to support it, and even then nothing was properly investigated.

Whereas the skulls from Lovelock measured no more than 12-14 inches from base to crown, there are others of considerably larger size that have been reported.

For instance, the well-known zoologist Ivan T. Sanderson, once received a letter from an engineer that was stationed on the island of Shemya in the isolated Aleutian chain in northwest Alaska during World War II.

While bulldozing a group of hills for a future airstrip, the workmen found several sedimentary layers, under which were found the skeletal remains of what appeared to be extremely large humans. Most of the giant skulls measured about 22 to 24 inches from base to crown; whereas, a normal human skull only measures eight inches.

Apparently, Sanderson later received an additional letter from another person in the unit, who confirmed the story. Both letters indicated that the Smithsonian Institution had taken possession of the remains, and of course, they were never heard about again.

Sources: Mystery of America: Enigmatic Mysteries and Anomalous Artifacts “A Connection to the Ancient Past” by Tedd St. Rain

What If The Dinosaurs Hadn’t Gone Extinct, But Evolved?

Road of the Giants Formed in DAYS, Not Thousands of Years