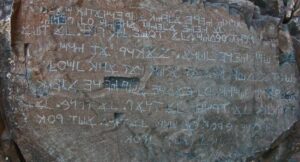 The Los Lunas Inscription also known as Commandment Rock is an abridged version of the Decalogue or Ten Commandments, carved into the flat face of a large boulder resting on the side of Hidden Mountain, near Los Lunas, New Mexico, about 35 miles south of Albuquerque.

The site has been known as “Mystery Mountain” by the locals for many years. The language is Hebrew, and the script is the Old Hebrew alphabet, a letter group representing tetragrammaton YHWH, or “Yahweh,” makes three appearances with a few Greek letters mixed in.

The stone is controversial in that some claim the inscription is Pre-Columbian, and therefore proof of early Semitic contact with the Americas. However, conventional history teaches that the Americas were discovered by the Europeans either in 1492 by Columbus, or maybe a few hundred years earlier by the Vikings. 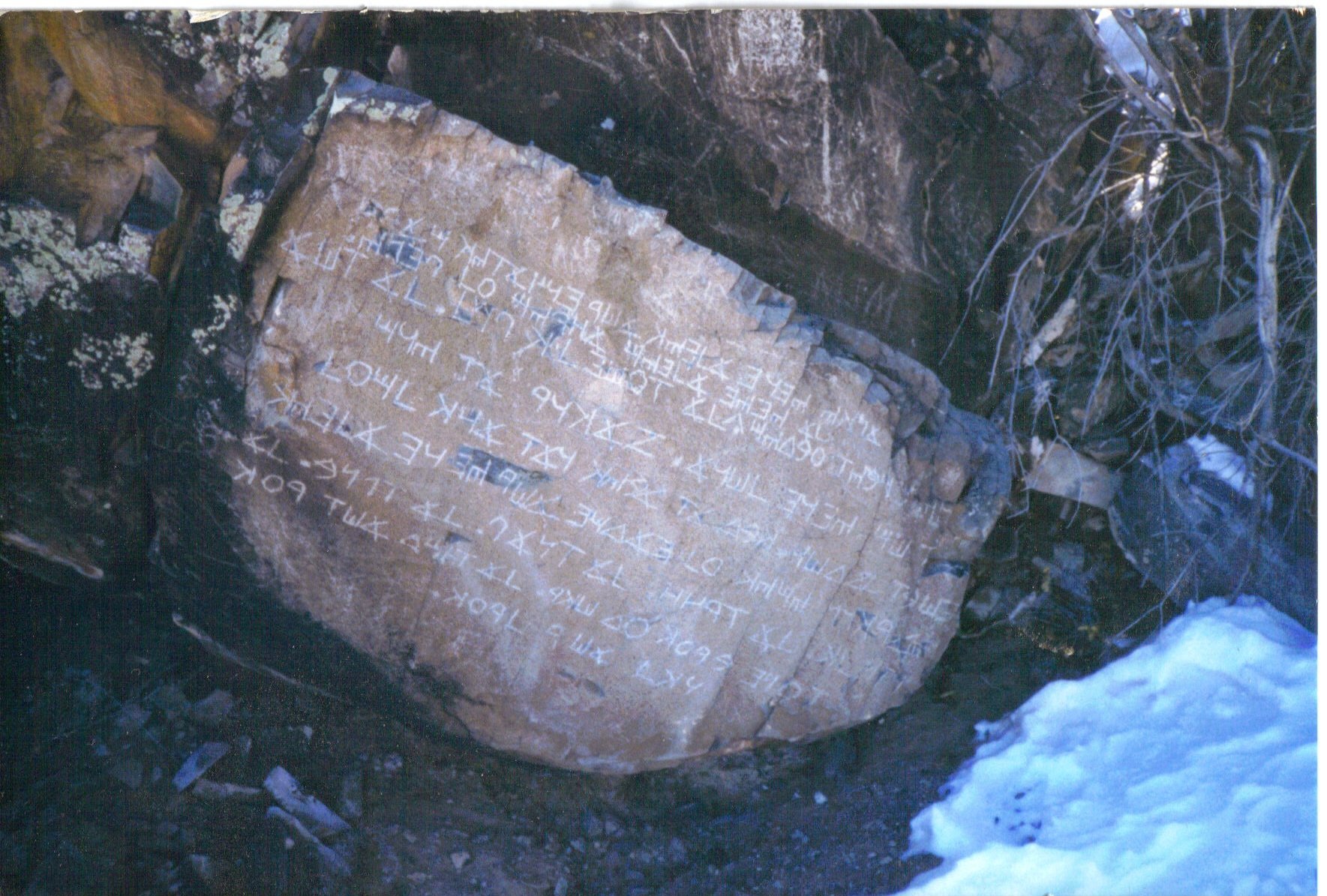 There still seems to be an aversion among the establishment historians to even consider the idea that ancient Mediterranean peoples from the Middle East might have traveled to the Americas in the centuries before Christ.

The stone was discovered by Frank C. Hibbena (1910-2002), a retired University of New Mexico archaeologist in 1933. He concluded that it was at least 100 years old.

He much later claimed to have been shown the site by a guide who had seen it as early as 1880. Others have concluded from the text that the inscription must be much older.

As with other alleged evidence for pre-Columbian Semitic presence in North America, such as the Bat Creek inscription, the Tucson artifacts and the Newark Holy Stones, the Los Lunas Stone is marked by the absence of any associated archaeology that would establish its authenticity or date the inscription.

In 1996, Prof. James D. Tabor of the Dept. of Religious Studies, University of North Carolina – Charlotte, interviewed the late Professor Frank Hibben, “who is convinced that the inscription is ancient and thus authentic. He reports that he first saw the text in 1933.

At the time it was covered with lichen and patination and was hardly visible. He was taken to the site by a guide who had seen it as a boy, back in the 1880s.” At present the inscription itself is badly chalked and scrubbed up.

However, George Moorehouse (1985), a professional geologist, compares the surviving weathering on the inscription to that on a nearby modern graffito dating itself to 1930.

He concludes that the Decalogue inscription is clearly many times older than this graffito, and that 500 to 2000 years would not be an unreasonable estimate of its age.

According to archaeologist Kenneth Feder, “the stone is almost certainly a fake.” He points out that “the flat face of the stone shows a very sharp, crisp inscription…” His main concern however is the lack of any archaeological context.

He argues that to get to the location of the stone would have required whoever inscribed it to have “stopped along the way, encamped, eaten food, broken things, disposed of trash, performed rituals, and so on.

And those actions should have left a trail of physical archaeological evidence across the greater American Southwest, discovery of which would undeniably prove the existence of foreigners in New Mexico in antiquity with a demonstrably ancient Hebrew material culture…” and states that “There are no pre-Columbian ancient Hebrew settlements, no sites containing the everyday detritus of a band of ancient Hebrews, nothing that even a cursory knowledge of how the archaeological record forms would demand there would be. From an archaeological standpoint, that’s plainly impossible.”

Because of the stone’s weight of over 80 tons, it was never moved to a museum or laboratory for study and safekeeping. Many visitors have cleaned the stone inscriptions over the years, likely destroying any possibility for scientific analysis of the inscriptions’ patina.

Nevertheless, comparing it to a modern inscription nearby, geologist George E. Morehouse, a colleague of Barry Fell, estimated that the inscription could be between 500 and 2000 years old and explaining its freshness and lack of patina as being due to frequent scrubbing to make it more visible.

In April 2006, the first line of the unprotected inscription was obliterated by vandals.