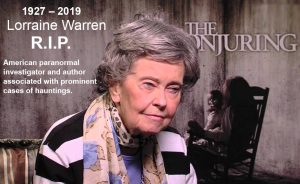 Ed and Lorraine Warren were already world-renowned legends in the paranormal field, but it was thanks to The Conjuring by James Wan that the duo rose to even higher prominence levels.

The whole universe is based on Ed and Lorraine’s case files, with Vera Farmiga playing Lorraine in the movies. Unfortunately, we learned that at the age of 92, Lorraine Warren passed away yesterday.

On Facebook, McKinnell wrote, “Last night my grandmother, Lorraine Warren, quietly and peacefully left us to join her beloved Ed. She was happy and laughing until the very end. She was my angel and my hero, and she will be deeply missed. Please join us in celebrating her life and honoring her beautiful soul. Remember to treasure those you love while you can. Thank you and God bless you all.”

Born on January 31, 1927, in several notable cases throughout their careers, Lorraine Warren and her late husband were involved as key paranormal investigators, including the infamous “Amityville Horror” hauntings, as well as the cases of Annabelle, Perron family and “Enfield Poltergeist”.

Stories of ghost hauntings popularized by the Warrens have been adapted as or have indirectly inspired dozens of films, television series and documentaries, including 17 films in the Amityville Horror series and five films in The Conjuring Universe with two more yet to be released.