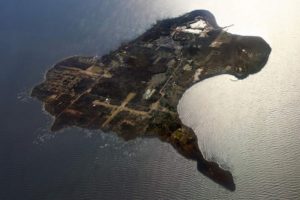 Lake Erie tends to be a favorite destination for those longing to actualize the water vapor that surrounds us during summer, and few places on the lake offer an atmosphere like Kelley’s Island.

Here there is a sense of history, beauty, relaxation and a variety of paranormal occurrences that provide a perfect retreat from the daily grind. If none of those things work, then go to The Village Pump for a pitcher of Brandy Alexander.

By dating pictographs on Inscription Rock, historians believe the island was first inhabited by various Native American tribes in the early 1600’s. By the late 1600’s some Iroquois saw how good the other tribes had it on the enclave and decided they wanted to live there, so they came ashore, killed everyone and set up camp.

In 1803 a french pioneer by the name of Cunningham tried settling on the island and did alright for a while, then pissed off the Indians, then was attacked by the Indians, then barely rowed his canoe to the Ohio Peninsula before dying from his wounds.

A few other palefaces tried to inhabit the island but Cunningham seems to have irrevocably damaged any native/settler relations and each was sent packing.

When the War of 1812 began raging in the waters nearby, the constant din of cannon fire and commodores shouting things like “DON’T GIVE UP THE SHIP!” proved too much for the Native Americans and they moved on to more peaceful environs. Finally, “civilization” could get a foothold and plundering of the island’s natural resources was able to begin!

Folks immediately started moving in and, by 1840, brothers Datus and Irad Kelley had purchased the island, along with its valuable timber and limestone quarry, and named the hunk of rock after themselves.

Not long after the Kelley brothers took possession of the quarry problems began to arise. The workers were Italian-Catholics and the supervisors were Protestant, which resulted in frequent skirmishes.

One day things really got blown out of proportion when a worker named Battaglia was ordered to use an enormous amount of dynamite to blast away a rock shelf that hung over the quarry.

Battaglia complained that the explosion would blow the place to smithereens but his boss insisted he press the plunger. Battaglia was right. Boulders and water came rushing towards the men with a giant wave sweeping twelve of them to a watery grave at the bottom of Lake Erie.

After the accident stories began to circulate of strange sights and sounds coming from the quarry and, before long, visions of ghostly figures reaching up from the lake to claim the souls of those aboard ships in distress became commonplace.

These stories were substantiated in 1932 when a boat named The Sand Merchant capsized near Kelley’s Island. The few that survived the sinking of the ship shocked island residents with accounts of phantom voices that cried out as the boat was engulfed, coupled with waves that appeared as hands dragging many of their crew into the murky depths.

The islanders began to consider the quarry cursed and rumors circulated that anyone associated with it would come to a bad end. For example, there is the ironic tale of John McDonald. In 1854, a 26 year old McDonald was hired to clear a plot of land that would become the island’s cemetery. 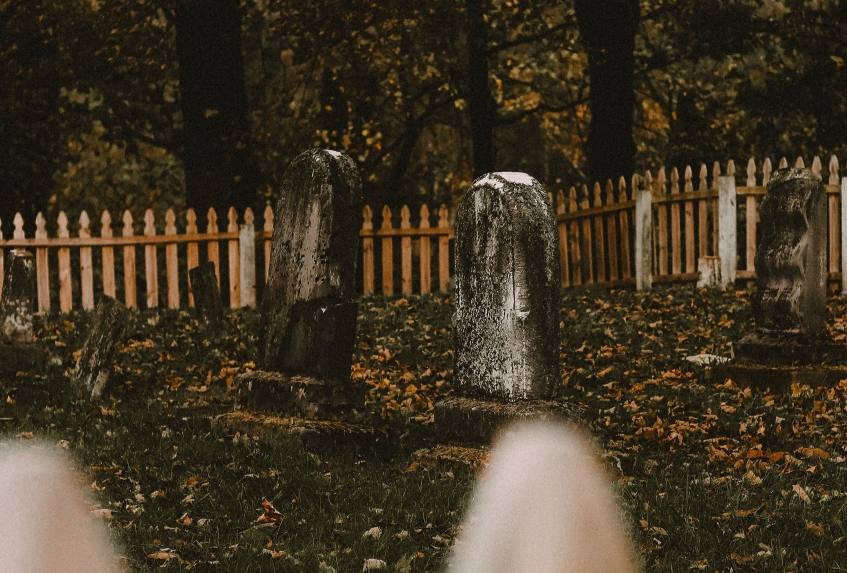 When admonished for doing a poor job, John, with all the arrogance of youth, replied that he didn’t care if the cemetery looked nice as he would never be buried there. Then a few weeks later John was killed in another blasting accident at the quarry and became the cemetery’s first interment. Wah. Wah.

Then there was Elizabeth Selfe, who moved to the island in 1871 with her husband, James, and their six children. They hoped that James new job at the quarry would be a turning point for the struggling family.

Instead, he died of typhoid two weeks after their move and Elizabeth was forced to send four of her children to live with relatives, and remained on the island with her two youngest offspring in a cabin on what is now the site of Camp Patmos’ swimming pool.

The little family was trudging along just fine until the evening of June 24th, 1877, when Elizabeth complained of a headache after dinner. At the time her children didn’t find anything terribly unusual about this.

Then, as they were preparing for bed, Elizabeth’s daughter, Jennie, screamed that she had seen a man with a black hat staring in the window with his face very close to the glass. Elizabeth quickly closed the curtains, dismissed the incident and instructed the children to return to sleep.

That was easier said than done, as the kids were jolted awake in the middle of the night by their mother screaming and convulsing on the floor of the bedroom. When they finally calmed her down, Elizabeth went to the front room of their home, where she could be heard pacing back and forth and gibbering into the night.

The sounds were finally quieted when James Jr. heard the front door of the cabin stealthily open and then close sometime before dawn. Assuming his mother had gone out for some fresh air, the young man fell asleep.

When the children awoke the next morning and noticed that their mother’s shoes were still there but she was not, a search party was summoned. Upon investigating, authorities found Elizabeth’s undergarments on the lake shore along with a sack that didn’t belong to her and by the cabin window a men’s size twelve boot print.

After eleven days of searching, Elizabeth’s battered body was discovered on the eastern shore. While her death was officially ruled a suicide, the examining doctor was of the opinion that she was murdered – a belief shared by her friends and family.

Unfortunately, these opinions went unheard and the official ruling remains, as does the mystery of strange events that led to the end of Elizabeth Selfe. Could her spirit be the dark figure campers see wandering the shore line late at night?

While we’re on the subject of strange disappearances, Kelley’s Island is also a bordering point for a section of Lake Erie known for unexplained plane crashes and sinking boats. The waters in between Kelley’s Island, the Hen Islands and the West Sister Islands form a triangle whose dangers, according to locals, rival that of the more famous Bermuda Triangle.

Like the Bermuda Triangle, travelers in this area report the sudden formations of a strange fog on otherwise sunny days, feelings of disorientation and baffling malfunctions of navigational equipment.

What forces have caused upwards of 400 experienced pilots and ship captains to get lost, crash or disappear during good weather in a shallow body of water where they are never more than a few miles, and almost always in sight of, land – often so quickly that they don’t even get a chance to radio in a distress call?

More than a few folks suspect that little green men are to blame for the phenomenon, citing Lake Erie’s long and storied history of UFO sightings, but, for brevity’s sake, I’m going to stick to ghosts…

The triangle also happens to encompass the waters where the Battle of Lake Erie was fought in the War of 1812.

Because many of the soldiers killed in the battle were “buried at sea” (ie. swept off the deck with a broom or unceremoniously kicked into the water) some believe their spirits haunt this section of the lake, seeking revenge for the undignified manner in which they were dumped into the drink.

Or, maybe, South Bay Bessie is sinking ships and leaping out of the lake to enjoy the occasional snack of a Cessna. She has been spotted a number of times in the water surround the island.

Whether it be Martians, monsters or marauding murdered mariners, Kelley’s Island offers a variety of strange tales and legends for those seeking a getaway on the waters of the aptly named Lake Erie. Just avoid the damned quarry!