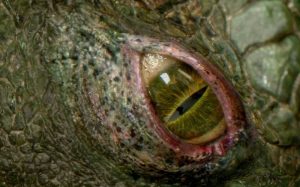 “It was strong and angry. I looked in my mirror and saw a blur of green running. I could see his toes and then he jumped on the roof of my car.” These are the words of Lizard Man’s first witness, Christopher Davis, a 17 year old local. It may have been easy to write off the statement based on Christopher’s age, but then it started happening more and more, leaving additional evidence with every sighting. Welcome to Scape Ore Swamp…

The swampland in and around Lee County, South Carolina is dense, dark, and smells particularly bad even for a swamp.

If there weren’t a road running through it the swamps would be completely vacant of humans. Rockfish Lane is a small two-line road that cuts directly through the center of Scape Ore Swamp, home to the Lizard Man, and it has been the focus not just of sightings such as that listed above, but some much more terrifying things.

Original sightings of the creature following the first Davis sighting were spreading like a rash. Local law enforcement officials reacted to the reports of the Lizard Man with both concern and obvious skepticism. While the idea that there may be a man-sized two-legged swamp creature in their county’s backyard was hard to swallow, it was also difficult to ignore the number of reports and that many of these reports had been made by reliable people.

In 1989 Expeditions were assembled to enter the swamps and on these the Sheriff’s department discovered tracks left by a two-legged creature with three toes deep within Scape Ore Swamp. From the spacing of the imprints it was determined that the creature stood upright, but when turned over to local biologists and experts on the swamps of the region the conclusion was that the prints were “unclassifiable”.

South Carolina Marine Resources Department spokesperson Johnny Evans stated that “the tracks neither matched, nor could be mistaken for, the footprints of any recorded animal.” Evans also outright dismissed the possibility that these were the prints of a mutated or deformed known creature, or that they were manufactured. The prints were sent to the FBI for further analysis, but were not returned and no conclusion was offered by the agency.

Fortunately, that wasn’t the only evidence, that same year Kenneth Orr, an airman stationed at the nearby Shaw Air Force Base reported to authorities that not only had he been attacked by the creature, but that he had fired two shots at it and wounded it.

He was also able to provide the authorities with several scales and a small quantity of blood as evidence. Orr described the Lizard Man as being over 7 feet tall, walking on two legs, and muscular. He described its flesh as covered in dark hair with scaly lizard green skin on its hands, feet and face. Orr added that it may have had a tail but was uncertain.

The explanation behind The Lizard Man of Scape Ore Swamp remains to this day a mystery. Numerous investigators, both amateur and professional have explored the swamps without results, but sightings continued.

There have been additional attacks since the Kenneth Ore account, including Lizard Man’s assault on Bob Rawson and his wife while they were driving through the region. The damage to the Rawson’s car as shown in Bob Rawson’s interview with CNN is startling to say the least. 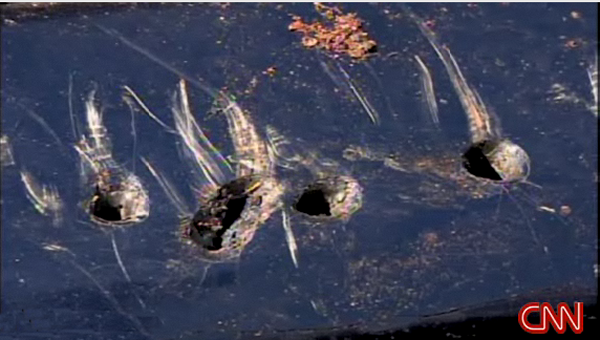 The idea of a seven foot tall, half man, half lizard creature is so over the top ridiculous to so many people that cryptids of this type don’t generally make it to mainstream knowledge, but the fact is that The Lizard Man of Scape Ore Swamp is far from the only one.

There are reports of lizard men from Chile to Canada, and in fact tales of lizard men date back thousands of years. In ancient China they were regarded as great spirits and called Dragon Kings. The ancient Sumerians worshipped Ningishzida, a serpentine man said to serve the Hydra.

Whether or not there is any reality that brought about the ancient stories, and whether or not the depictions of the Lizard Man of Scape Ore Swamp are exaggerated there is one thing for certain – there is something in the swamp with claws strong enough to tear through metal.

The Man of the Sea: The Caspian Merman