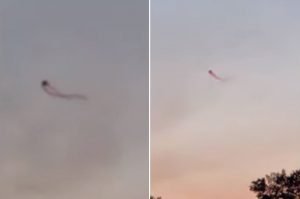 While most people consider the term ‘UFO’ to be directly linked to that of alien spacecraft, there are some who consider the exact opposite, meaning that instead of the futuristic approach of artificial objects they view UFOs as organic entities that inhabit the cosmic void surrounding us.

A dark reddish out of place object or being with a trail appears in sky over Dover, Delaware moving towards the photographer.

Then it seems to turn away and the single trail turning into two trails, like tentacles. It finally went from reddish to black before it disappeared into a cloud formation.

Some commentators believe that there is an object in the video that represents a plasma life form that lives in the upper atmosphere of the Earth.

It seems impossible, but could it be a living being, a bioform that lives in free space?

Are these beings the same with the orb-UFOs? Can they really morph into living spheres of light? These are troubling questions to answer for the moment, but if it proves to be so, it would indeed explain an entire lot of UFO sightings.

Woman after a coma spoke with a New Zealand accent