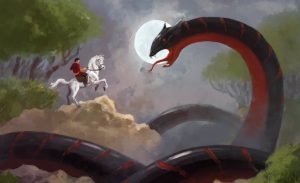 Myths along the Nordic coast abound with tales of the lindworm, but, there have been sightings that indicate the creature could be a cryptid.

The lindworm, a creature that’s said to be native to the Nordic Coast, is featured in myths of Norway and Sweden. It’s called the lindworm or lime tree serpent, because its said to lay its eggs under the bark of the lime tree.

Although it’s often been referred to as a dragon, the creature has no legs or wings, it can’t fly and it doesn’t breathe fire. Finally, a distinction was made between the lindworm and the dragon in Scandinavia.

The dragon was viewed as a supernatural entity, while the lindworm was considered to be a real animal, a gigantic snake with powerful venom.

Description of the Lindworm

In 1885, Swedish scientist and folklorist Gunnar Olof Hylten-Cavallius published a description of the lindworm, based on information that was gathered from witnesses’ accounts.

Generally, it’s said to be about ten feet long, but it can reach lengths of up to twenty feet. Its body is as thick as a man’s thigh and is colored black, with a yellow belly.

Old specimens have long hair or scales on their necks that resemble manes. The head is flat, round or squared with a mouth full of shiny white teeth and a forked tongue.

Its eyes are large and saucer-shaped. The tail is short and stubby; its shape, unwieldy. 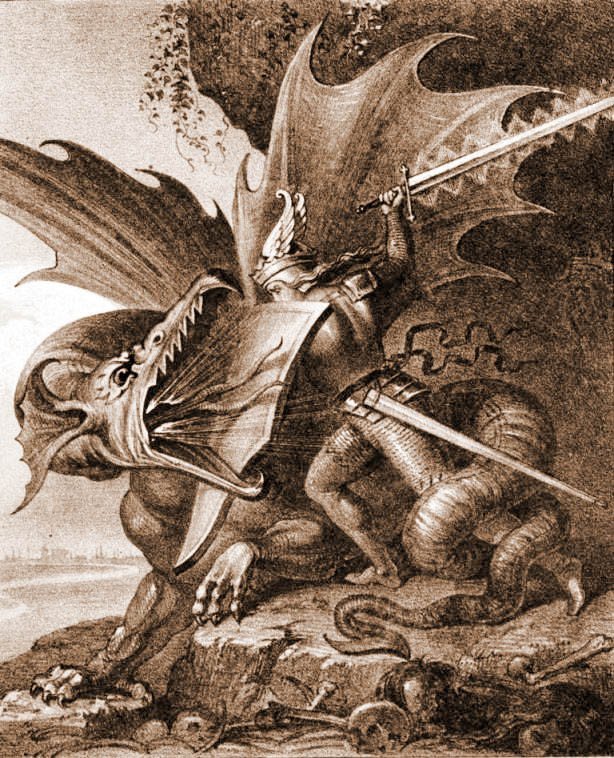 These creatures were large and fierce and, allegedly, ate horses, cattle and humans. They invaded churches and churchyards to dig up corpses. Its aggressive nature was stressed. The lindworm violently attacked anyone who vent­ured too close and, sometimes, did unprovoked attacks.

In the province of Skåne, on a Whitsunday in the 1850s, Elna Olsdotter was on her way to church when she stopped to rest under a big lime tree. An enormous lindworm appeared from within the tree and devoured her.

In another part of Skåne, a little girl and her mother were picking berries near the stump of an old lime tree when the girl saw a huge snake lying in the tree. When she reached to touch it, she was snatched up and eaten.

Supposedly, in Småland, people have seen a large snake they called dragon, lindworm or wheel-serpent. It’s said to move by putting its tail in its mouth and rolling, like a hoop.

In contrast, some Swedes believed that the lindworm was a huge horse-headed serpent that guarded ancestors’ graves and burial mounds and, when it grew larger, became a sea serpent.

Is the Lindworm a Cryptid?

When folklorist Jan-Öjvind Svahn talked about the creature during a TV show in the 1980s, he received accounts from more than twenty people who saw huge unknown animals in the woods.

Sightings usually occurred around lakes, where the creature was also seen swimming. The reports referred to the creature as a lake monster, not a lindworm.

Their descriptions of the creature had a lot in common with Hyltén-Cavallius’s account of the lindworm.

One woman said that her Uncle Ingvar took her to a place in the backwoods where he grew up that was known as lindworm land. There were several streams that crossed each other and moist moss-covered ground between them.

He believed that lindorms were very large eels that were migrating from one stream to another. He saw them when he was young. The European eel, Anguilla anguilla, grows up to 4.92 feet in length, has a dark brown back, a yellow belly and a fin running on its back that could be mistaken for a mane.

The most common explanation for the lindworm hysteria of the 1800s is that witnesses saw large grass snakes, Natrix natrix, which can grow up to 6.23 feet and often have a dark back with a lighter colored belly. Both of these theories don’t account for witnesses’ descriptions of the lindworm.

Some tales are, obviously, myths, such as the story about the Greek King Midas who was able to turn all that he touched into gold.

The fact that all of the accounts of witnesses who saw the lindworm were described with such remarkable consistency strengthened Hyltén-Cavallius’s conviction that he was dealing with a real animal.

The reports of sightings to Svahn also had descriptions that agreed with Hyltén-Cavallius’s. Not all lake monsters are confined to water. The bunyip, an Australian cryptid, has been sighted in water and on land. The debate is ongoing: lindworm, cryptid or myth?