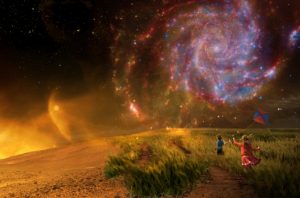 According to eastern and occult philosophy, mankind lived in other planets before Earth existed. Theosophy explains where humans come from, where they will go and why.

Ever since the very beginning of humanity, people have been looking at the sky wondering if humans are the only ones in the universe, and, if there are other forms of life somewhere else, what are they like?

The Theosophical Society founded by Helena Blavatsky uses eastern philosophy and Hermetic knowledge to explain the various forms of life in the universe.

In the book The Secret Doctrine, Blavatsky explains the cosmogenesis, that is, the origin of the universe, its various planets and inhabitants and the laws that rule the evolution of every living being.

Blavatsky says that before being humans, every person started life as a mineral in another planet. Minerals belong to the first level of consciousness, it’s from there that every living being evolve.

There are seven levels, or seven different experiences that living beings go through in order to achieve full consciousness, what the Hindus call Atman, or “Will” in English.

Each of these levels correspond to a different planet, and the seven planets are called “planetary chain”.

The Planeteray Chain – From Minerals to Humans

The first four levels of consciousness of the planetary chain are:

Mineral Experience – Minerals are the first expression of consciousness, therefore, the first planet of the planetray chain, according to Theosophy. In this level, there is no self-consciousness, no free will, no choice.

Minerals evolve “automatically” along with the planet (which is also a living being) and at some point after some billions years, when the minerals have reached all potential as minerals, the planet ends and it’s time for the minerals to become plants in another planet.

Plant Experience – Plants correspond to the second level of consciousness, it’s the second planet of the planetary chain, they still don’t have any choice or free will, evolving automatically along with the planet.

In this level, sensations emerge as plants respond to heat, cold, dryness and humidity. The survival instincts start to emerge. After some billion of years as plants, the planets ends and it’s time for plants to become animals in some other planet.

Animal Experience – In this level of consciousness, the survival instincts are already developed and shaped, some animals will start to show other skills such as group sense, they identify others and care for them.

After billion of years as animals, the planet ends and animals will become humans somewhere else. Animals that show more ability to interact with others and be cooperative in groups such as monkeys are closer to the human experience that comes next, in the fourth planet of the planetary chain.

Human Experience – Humans beings, according to Blavastky, have been minerals, plants and animals before, where they developed sensations and instincts. The main purpose of humans is to develop the mind.

Earth is the planet that correspond to the human experience of this humanity and it will last for as long s it’s necessary for humans to have full control over their minds. Once it’s achieved, humans may be able to inhabit other planet where other skills will be developed.

It’s important to point out that there are many other planets out there that have passed through all this process and their inhabitants are now in a more advanced level of consciousness.

Manas, Budhi and Atman According to Theosophy

The other three levels of consciousness are called in Sanskrit “Manas”, “Budhi” and “Atman”. Manas is often translates as “Pure Mind” in English. This is when humans end their experience on earth and they can be born in another planet where there will be no ego anymore.

The consciousness in the Pure Mind experience develop the community sense and inhabitants of other planets that reached this state are aware that the main purpose of all this processes is to reach Atman, the final destination of every living being.

So, what theosophists call intelligent extraterrestrials are societies in other planets that have reached a level of consciousness which is one step higher than humans. They have been humans before as well, in other planets. It’s important to remember that there are many other planets in universe that are experiencing each of the seven levels.

The other two levels are “Budhi”, translated as “Intuitional experience” and Atman, that correspond to highest levels of consciousness. At this point, the truth is accessed directly without the interference of the mind, inhabitants that belong to this state can be anywhere at anytime.

Knowing they are a part of the universe, and the universe itself, they work to keep the universal order. There’s no difference between this and God, as the consciousness in Atman merges with the creator, being only one.

The Journey of Consciousness

For Theosophists, the system of the planetary chains represents the macrocosm of the seven stages that humans go through, first as as babies that don’t recognize themselves as a different consciousness from their mothers, then acquiring sensations, developing survival instincts, intellect, community mind, intuition and finally reaching all the potential as humans, when everything learned in a life time adds knowledge and wisdom to the spirit.

Then comes death, when one returns to the source only to reborn again, wiser and better. This is the process through which everything evolves – from cells to galaxies.