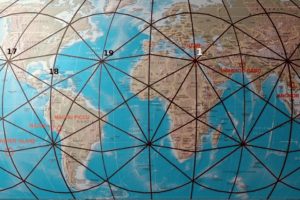 The term ‘Ley Line’ was invented by Alfred Watkins, a British businessman. In 1921 he was looking for interesting features in a regional map when he noticed that many ancient and sacred sites could be placed on a straight line running through the countryside.

As he researched the subject more, Watkins discovered that these mysterious lines could be identified, not just by marker points, but that some were physically visible from the ground.

The lines were anything from two to several miles long and their reference points were objects like ancient churches, standing stones, stone circles and prehistoric burial sites.

In 1922 Watkins published his first book, Early British Trackways, which explained his initial thoughts on the subject.

He published his seminal work, The Old Straight Track, which fully demonstrated his new-found phenomenon, in 1952. Watkins used the term ‘ley-lines’ or ‘leys’ as it came from an old Saxon word for cleared glade. He believed they were trading routes for Neolithic Man who used ancient surveying techniques to create long, straight lines.

His theory followed the thinking that many areas on these routes became sacred sites, and over time the pathways fell into disuse, leaving only the special points discernible.

He also believed that many of the ancient, pagan holy sites were later commandeered and Christianised, leaving a fascinating mixture of both prehistorical and relatively recent points of interest along the lines.

Despite the fact that these paths followed a perfectly straight line, which often meant cutting through forests, climbing up valleys or running across hilltops, Watkins maintained his belief that they were trading routes. By 1929 he had stopped referring to the old leys, simply calling them ‘old straight tracks’.

Watkins died in 1935 but his idea had instigated the formation of the Straight Track Club, a collection of interested enthusiasts based across Britain who enjoyed investigating their own regional versions of ley lines.

Many people felt that the difficult routes taken by leys running through steep or testing countryside meant they were unlikely to be pathways for traders – other theories about their nature was put forward. In 1936 a British writer called Dion Fortune first suggested the idea that ancient sites could be linked by lines of mysterious cosmic forces.

A member of the Straight Line Club, Arthur Lawton, continued with this notion in 1938. Lawton was a dowser, and had been fascinated by German and French dowsing theories that were connected with standing stones, so he formulated the idea that leys were lines of natural energy that could be proven by dowsing.

During the Second World War the Straight Line Club and its activities dwindled, but in the 1950s new ideas about leys burst into the public’s consciousness. Various UFO books from France and America linked the flying saucer phenomenon with lines of cosmic force.

In 1961, Tony Wedd, a British ley hunter and ex-pilot, published his theory that leys were magnetic flight paths for alien visitors, and any sites of interest found along them acted as landmarks.

From Wedd’s work, the modern movement in ley research truly began when in 1969 another enthusiast, John Michell, wrote The View Over Atlantis, a book that combined ley lines, earth energy, UFOs and ancient mathematics.

The 1960s and 70s saw all manner of New Age theories, and leys began to be automatically associated with lines of energy, flying saucers and strange psychic experiences.

The phenomenon spread across the world, and New Age enthusiasts were eager to seize the idea of cosmic forces and aliens wholeheartedly. The city of Seattle in the USA even readily gave a $5,000 grant for a group of dowsers to create a ley line map of the area.

To some extent they missed the original point of ley lines, which was they were straight routes connecting sites of sacred interest. In fact, the United States has its own version of Watkins-style leys. Native American ‘Spirit-Lines’ found across the country are believed to have been ancient sacred pathways.

Similar features are found in Mexico, and it has been suggested the Nazca lines may be a variation on the same theme.

So the real significance of leys is still unknown. Although the theories and background ideas have bred and multiplied, few people have discovered more ley line facts than Alfred Watkins.

It would be a shame to see the phenomenon of ley lines become synonymous with extreme New Age ideas because it has a fascinating historical and geographical background that has not yet been fully studied.

Sources: 100 Most Strangest Mysteries by Matt Lamy; Antigravity and The World Grid by David Hatcher Childress