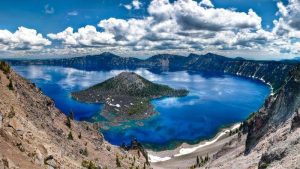 Mount Mazama, South East of Eugene Oregon is not what it used to be. The mountain once stood 12,000 feet high, but sometime roughly eight hundred years ago the Klamath tribe, which lived at its base tell that they witnessed something incredible, their legends tell of a battle between the sky god Skell and the god of the underworld, Llao.

It was a battle that took over 1,000 feet from the top of the mountain. Today we say it was a volcano, but why then is this one of the most visited locations in the US by UFOs, second only to Alaska. Welcome to Crater Lake…

Today the scene of the great battle, whether it was between ancient Gods or natural cataclysm is a twenty square mile anomaly, a crystal lake almost 2,000 feet deep with no rivers running in or out. For five hundred years the lake was devoid of any life, just a motionless bed of water resting 11,000 feet above sea level.

They tell that the legions of the Sky God keep watch on the gateway, Crater Lake to ensure the safety of all life above. Ancient myths are quite often just that, but when beings from the sky keep hovering around the place where the ancient peoples say they will, you have to start wondering.

To date there have been over 1,100 reported sightings of UFO activity over Crater Lake, many of these by large groups of people.

More notably is that a good number of these sightings include witness reports of United States Air Force fighter jets entering the area immediately after the sighting.

In late 1980s ecologists using a manned submarine discovered evidence of hydrothermal vents exists on the lake’s bottom. Scientists have yet to understand completely Crater Lake’s ecology but they can confirm that the base of Crater Lake is not the base of the depression in Mount Mazama.

In simple terms that means that there is in fact a very large chamber under the lake itself and if the legend told by the Klamath, the only witnesses of the original event, are true then it also means that there is something down there, something so evil that should it escape it would pose a risk to all life…