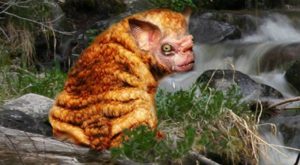 Often referred to as “the world’s ugliest animal”, the mythical creature known as the squonk occupies a unique place within the annals of American folklore.

While most creatures that have been studied and/or searched for by cryptozoologists are often reported to be somewhat dangerous or unfriendly to humans, the squonk is solely a non-threatening creature, and may even be regarded as worthy of pity or sympathy due to its somewhat dejected nature.

The earliest accounts of squonks originated in the late 19th century, in a heavily wooded region of northwestern Pennsylvania known today as Cook Forest State Park. The squonk (Latin: lacrimacorpus dissolvens) is typically described as being a four-footed creature roughly the size of a beaver or an opossum, with extensively oversized skin and drooping features.

The squonk’s thickly wrinkled skin is full of moles and warts, and according to legend, the creature is so ashamed of its unsightly appearance that it weeps constantly and attempts to hide itself as much as possible.

Squonks are commonly known to be nocturnal and reclusive, making their dwelling among the hemlock trees of the Pennsylvania wilderness. These pitiful creatures tend to avoid human contact as much as possible, but due to their constant weeping they leave a tear-laden trail of wet soil behind them, making them easy to track.

Even though they are not known for their speed or quick-wittedness, squonks are still able to evade capture by dissolving into a bubbly pool of tears when cornered.

Author William T. Cox devoted an entire chapter to the squonk in his relatively obscure 1910 book entitled Fearsome Critters of the Lumberwoods, with a Few Desert and Mountain Beasts. Cox describes the squonk as “always unhappy” and “the most morbid of beasts”, emphasizing its downtrodden nature.

Cox also mentioned the intriguing legend of a hunter named J.P. Wentling who managed to capture a squonk in a bag, but as he carried the squonk home, he noticed that the bag suddenly became significantly lighter.

Out of curiosity Wentling opened the bag, only to find that the sad creature had completely dissolved into nothing more than a pool of liquid. Cox’s tale earned a spot in The Book of Imaginary Beings, a 1969 reference guide authored by Jorge Luis Borges that profiles over 100 different mythical creatures from the folklore of various cultures around the world.

The squonk has surfaced in various forms of media and popular culture several times over the years. Steely Dan mentioned the forlorn creature in the song “Any Major Dude Will Tell You” (from their 1974 album Pretzel Logic), posing the question in their lyric “Have you ever seen a squonk’s tears?”

A Pittsburgh, Pennsylvania-based multimedia performance art collective known as Squonk Opera has often been cited as having named itself after the mythical creature, but the group claims that they derived their moniker from another source.

The band Genesis featured a track entitled “Squonk” on their 1976 album A Trick of the Tail. The song alludes to the story of J.P. Wentling, offering such lyrics as “I opened up the sack, all that I had / A pool of bubbles and tears, just a pool of tears.”

Squonks are often mentioned in the gaming and fantasy communities as well. The PlayStation 2 strategy game Culdcept offers the squonk as one of its playable creature cards. Nerdcore rapper M.C.

Frontalot also gives the squonk a cameo appearance in his track entitled “Scare Goat”, in which he mentions that he keeps a squonk in his house along with other infamous cryptids such as the aqueous mouse and the Mongolian death worm.

A common thread running through the majority of squonk references in popular culture is the incessant weeping of the mythical creature. In an episode of the Canadian television series Lost Girl, one of the teenage characters is referred to as a “squonk” because she is always crying.

Author Glen David Gold in his 2002 short story entitled “The Tears of Squonk, and What Happened Thereafter” compares one of the main characters to the squonk due to his propensity for crying “heedless crocodile tears”.

Although the squonk has earned its place as a creature of mystery and legend, ironically it seems to belie its own status through its reputed shyness and self-loathing. Whether the squonk will ever learn to love itself remains to be seen, but in the meantime, we can enjoy the complexity of its position as both a tragic and yet somewhat likable creature of American folklore.

What Is the Australian Cryptid, Yowie?