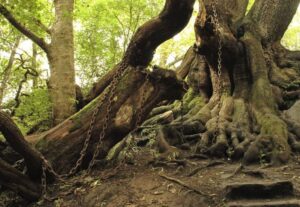 According to legend, one day around the 1840’s, as the Earl of Shrewsbury was returning home to his home at Alton Towers estate, a beggar woman stopped his carriage in the middle of the road near an old Oak Tree and asked him if he could spare a coin or two.

However, he cruelly refused and told his driver to move on, so immediately she put a curse on him. The old woman told the Earl that for every branch on the Old Oak Tree that fell off, a member of the Earl’s family would die. The Earl dismissed this and carried on his way.

That same night, a violent storm caused a single branch from the old oak tree to break and fall. Later that evening, a member of the Earl’s family suddenly and mysteriously died, which understandably scared the noble out of his wits.

To prevent other tragedies, the next morning, he ordered his servants to wrap metal chains around the branches to stop any more from falling off.

In 1918, the lands which the oak tree stands were sold off as part off a sale of estate assets.

But the story doesn’t quite end there…. On the 9th April 2007, one of main boughs of the old oak tree fell, the chains no longer able to carry the great weight. Fortunately, it has been confirmed by the family of the current Earl of Shrewsbury that no one has died since the incident.

And the great Oak tree which located near to the village of Alton, Staffordshire, England still stands to this day and around one-hundred and seventy years later, despite the collapse of April 2007, many chains remain in place.

There are slight variations in the story, however the core remains the same.

One version states it was an old man who cursed the earl, not a woman.

A second version is that instead of a storm bringing down a branch, the Earl’s son was out riding the next day and, as he passed the old oak tree, the woman had been standing under a branch which fell on top of him, knocking him from his horse and killing him.

The third version of the story, invented for the theme park attraction Hex – the Legend of the Towers at Alton Towers theme park states the Earl brought the fallen branch back to his home, where he performed experiments in his vault to try and break the curse.

According to the Stoke Sentinel, it is often said that myths and legends are often based on truth. The large chains were forged in the early 1800’s, around the same time that the tree’s legend is based.

Then there are the stone steps leading up to the tree, and the clearing around it, which someone spent a great deal of time and effort creating.