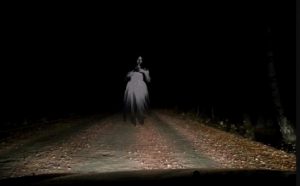 Anomalien.com reader Chuck shares his story about an encounter with the unexplainable.

Several years ago, my wife and I were traveling a lonely stretch of highway between New York and Vermont. It was 3 a.m. There were no houses, no streetlights, just pitch-black outside. We were anxious to get home, so even though the speed limit was 55, I was doing about 65 mph.

All of a sudden in the blackness, there was a ghost-white face of a young man with black curly hair right in my front windshield.

His face was brightly lit by my headlights. He looked frightened and was waving his arms frantically in front of him. There was no way that I could avoid hitting the young man.

My wife and I both screamed, cringed, and braced for impact… but nothing happened. There was no impact, and yet I was doing 65 mph. How could I have not hit him? I slowed the car down and stopped. I asked my wife if she had seen the young man. She had seen him plain as day, just as I had.

We both jumped out of the car, expecting to see someone lying on the road somewhere. I took out my huge spotlight flashlight and shined it up and down the road, but there was nothing there. No one was lying on the road anywhere.

We even walked up and down both sides of the highway, shining my spotlight into the woods, but we still saw nothing. We had to leave, but I told my wife that I was stopping at the first police station we saw because I was sure that something awful had happened.

We drove about 12 more miles and finally came to a state police station.

I pulled in and my wife and I went in and explained what happened. The two state policemen that I was telling our story to began looking at each other with smirks on their faces. Now I’m thinking that they don’t believe me, so I stopped talking and just stared at them.

One of the policeman said, “I’m sorry. We don’t mean to laugh, but what you saw was our local legend. About 15 years ago, a young man fitting your description was travelling that lonely highway alone in the dark.

“His tire blew and he tried to frantically flag down the first vehicle to come along. That vehicle was an 18-wheeler and the truck driver could not stop. The young man was struck and killed that night. Now every so often, night-time travelers see the young man still trying to flag someone down to help him.”

My wife and I left the police station with a mix of emotions. We were happy we hadn’t hit anyone on that dark and lonely road. We felt awful for the young man who apparently relives that horror over and over again. But we were also completely freaked out. We never believed in ghosts, but we do now.

True Ghost Story: The Little One (On The Road)