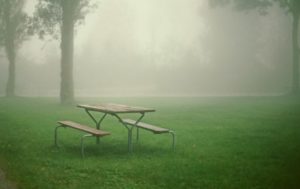 Minus the blood and gore and crushed corpses and police caution tape, not much has changed in 50 years. High up and deep within Griffith Park the scene remains otherwise no different from how it looked on the evening of October 31, 1976, when tragedy literally befell a young Hollywood couple, inconceivably crushed by a nearby tree that toppled over upon them while they made love upon a picnic table just off winding Mt. Hollywood Drive.

As lurid as it was inexplicable, the deaths of 22-year-old musician Rand Garrett and aspiring actress Nancy Jeanson, 20, were nonetheless a brief blip on the radars of local newscasts and newspapers, by and large laid to rest after their cremated remains were scattered upon the table and surroundings where the childhood sweethearts died in each others’ arms.

Though their ashes have long since blown away, what hasn’t been so quick to dissipate is the legend that has grown up around strange events and eerie occurrences — especially around the anniversary of their demise — that witnesses claim began happening shortly after their deaths and purportedly continue to occur to this day, bolstering a belief that the anguished spirits of Rand and Nancy are wandering never too far away from the picnic table that simultaneously brought them together and tore them apart.

“People thought I was damn crazy,” says retired city tree trimmer Morris Carl when he tried to explain what happened to him a few days after authorization had been given to clear the fallen tree and he was tapped for the duty. “I drove up there with a job to do and I aimed to do it. What I didn’t figure on was getting scared out of my wits!”

Carl is quick to add that up to that day he never gave much thought to whether ghosts were real. “But from that point on I certainly don’t give any thought that they aren’t,” he says.

According to the incident report he filed with his supervisor later that evening, Carl arrived at the site at 11:40 a.m. on November 7. He was to be joined by two other Bureau of Street Services Tree Division workers with a large truck and loader to remove the material later in the afternoon but until then he was charged with sawing up the branches and trunk of the large sycamore tree into more manageable pieces. Only a few minutes into it he wrote that was overcome with a strange sensation.

“In my statement I said that I felt funny. What happened was I’d sawed off the crown of the tree when from out of nowhere I got hit with these real strong chills so hard it was as if I was coming down with the fastest flu ever.

I tried to shake it off and get back to work, but each time I’d fire up the saw and get near the tree I’d get real cold and hear this weird moaning and crying. So I’d stop the saw and listen and it would go away. But then I’d start her up again and it would come back. Finally I was freezing so bad I had to go to the truck and get my coat.”

“I set down the saw on the picnic table and headed over to the truck, and that’s when I heard it start shaking from behind me. The tree just went crazy! Not just lightly shaking, but bouncing up and down as if someone was picking it up and dropping it.”

It landed repeatedly on the table with such force as to knock the heavy powersaw off the table to the ground.

As soon as that happened,” he wote in the report, “the tree stopped moving.”
But then the moaning started up again, accompanied by a warning from an ominous voice that Carl says sounded as if someone was sitting right there in the cab with him and whispering into his ear.

“It told me ‘leave us alone’ very insistently,” Carl says. “So I tried, but the engine wouldn’t turn over. Next thing is this rubbing sound along the windshield and letters are being written across the fogged up glass. First there’s an “n” and an “e” and the first word is “next.” Then there’s a “t” and an “i” and then that ends up being “time.” Then a “y” and an “o” and a “u.”

The last word was “die.”

“Man, but did the truck engine finally fire up right then and I burned rubber, Carl says. “Left the saw right there on the ground in broad daylight and just got the hell out. I still get chills, and no there never was a next time. I never went back.”

Plenty of others have though — including Carl’s supervisor, Dennis Higgs.

“See once Denny got over being pissed at me fro refusing to finish the job he turned it into a huge joke that got old real quick to me, but not to him. When that day came a month or so later and he’d asked me for the millionth time if I’d heard any knew ghost stories lately I broke and bet him $500 that he didn’t have the guts to shut up and go up there and cut that tree up himself. Dang if he didn’t take me up on it right there — and it was his crazy idea to go do it after dark!”

It was the last time Carl saw Higgs alive. The next morning just after sunrise a jogger heading uphill along Mt. Hollywood Drive found a city vehicle idling with its headlights on and pointed at the fallen tree.

Stopping to investigate the jogger found Higgs flat on his back and not moving, a chainsaw by his side with the blade bent into a u-shape. Summoning help with the vehicle’s radio paramedics arrived shortly thereafter but attempts to revive Higgs were unsuccessful.

“You know the coroner listed the cause of death as a heart attack,” Carl says, “but he died of fright! The fool’s hair had gone completely white and the paramedic who tried to bring him back told me Higgs had the most horrified expression frozen on his face as if he’d seen the devil.”

The initial police investigation even suspected foul play after finding Higgs’ hands injured and several fingernails broken in what looked to be a struggle against someone who dragged him from the side of the truck along the ground more than 15 feet toward the damaged picnic table.

“Not someone, “Carl insists. “Some thing!”

And while whatever caused his supervisor’s demise may be a matter of opinion, what is fact is that no attempt to take down that dead tree or to remove that broken table has been made since, something that Griffith Park’s Chief Ranger Albert Torres sarcastically thinks is city bureacracy at its finest. And he scoffs at the idea that the ghosts of Rand and Nancy are lurking in the shadows waiting to lashout at hapless passers-by.

“It’s a big park, somebody’s got to haunt it,” Torres says. “But frankly I’m not afraid of any make-believe demons as much as I am of some of the living and breathing human monsters who come here. Don’t get me wrong, the vast majority of the visitors to the park are here to enjoy themselves and its resources.

But if you knew even a quarter of the stuff we find within the park’s perimeter you’d never set foot in it again. Animal sacrifices, satanic cults, murders, prostitution… with stuff like that happening on a regular basis it makes a pair of 30-year-old ghosts look like good times.”

Not according to one former Griffith Park ranger who claims to have encountered the ghosts of Rand and Nancy in 2002 but would speak only on condition of anonymity.

“It was about 10 p.m. and I’d just come off a break on Mulholland Trail admiring the serenity and the view to the west. Heading north on Mt. Hollywood Drive I was passing the picnic table on my left and from out of nowhere I heard this unearthly noise from somewhere up in the brush to the north. I’d never heard anything like it before. It started as this horrible sobbing that alternated between screams and a wicked laugh that made the hair on the back of my neck stand straight up.”

A radio malfunction prevented the ranger from calling for assistance.

Shining the door-mounted spotlight at the table and beyond, the ranger saw what looked to be two shrouded figures freeze before fleeing deeper into the forest and melting into the dark beyond the reach of the beam.

All my training was telling me not to pursue. That and the fact that before they ran away I was looking at two sets of glowing red eyes staring back at me. That freaked me out, but I got out of the truck and gave chase anyway. I think it was more curiosity than common sense.

Armed with only a flashlight it was a curiosity that almost killed.

“The screaming stopped abruptly when I was not more than a few feet past the table and the fallen tree and for a second everything was quiet until I was overcome with this deep sense of dread and evil. There was no doubt in my mind that whatever was out there was angry at my presence and was going to do whatever it could to get rid of me.”

And that’s when the ranger’s flashlight failed.

“Unable to see at all I turned to run back to the truck but I was suddenly enveloped in a suffocating embrace and there was this freezing cold air on my neck as if something had grabbed me around my chest and was breathing on me. Then a voice whispered ‘leave us alone!'”

And the stink is something the ranger will never forget.

“It was the smell of death,” and the last thing I remember before coming to on the hillside a short while later.”

It was still dark when the ranger woke up.

“I wasted no time thinking about what had happened or why I wasn’t dead or why my shirt had been undone and my chest hurt and instead just got buttoned up and back to my truck where I found the radio back in working order and my supervisor on the other end wondering where the hell I was. I gave some half-assed explanation about being out patroling on foot and got back to the station as quick as I could.”

The ranger filed no report on the incident, but put in for a transfer first thing the next day after coming home and finding out the reason behind the unbuttoned shirt and burning chest pains.

“I was all set to start to blame what happened as the product of an overactive imagination until I got home and took my shirt off to take a shower and found my chest caked in dried blood from a warning scratched into it as if with a fingernail.