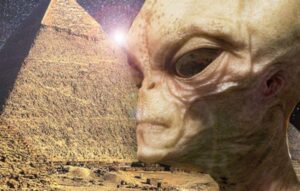 According to legend, one hundred pyramids in China are proof aliens have visited our planet, reports Pravda online. The mystery behind the claim begins with the journey of two Australian merchants to the vast plains of Sichuan in central China during the early part of the last century.

While there, the men stumbled upon pyramids that were first described in writings more than five-thousand years ago.

A monk related the history of the pyramids to the men, revealing they were built when China was ruled by ancient emperors who believed in the existence of extra-terrestrial civilizations.

In fact, the emperors not only believed in aliens, they insisted they themselves were descendants of “the sons of the sky.” They gave their alien ancestors credit for the construction of the architectural wonders and claimed the aliens came to earth on “iron dragons.”

Fast forward almost a century later to the year 1994, austrian Hartwig Hausdorf made a trip to central China near the city of Xi’an, the capital of the Shaanxi province.

While there, Hausdorf stumbled upon six of the legendary structures. Amazed by what he had seen, he returned later that year with a video camera. His footage recorded more than one hundred pyramids in an area of approximately twelve-hundred square miles.

According to the Pravda report, the structures range in height from eighty to three hundred feet, with one exception. The so-called “Great White Pyramid” just north of the others is said to be almost one-thousand feet tall.

The pyramids are composed of clay and sand and are in poor condition because farmers have removed the soil over the years for their fields. Excavations are now banned, and the area surrounding the so-called “Great White Pyramid” was recently declared completely off-limits by the Chinese government.

Ironically, that very same area is now used as a launch site for rockets – modern-day civilization’s very own “iron dragons.”