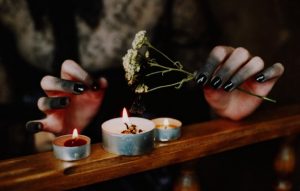 A controversial new book tells you how to put curses on your enemies by harnessing your dark powers in four steps. All you have to do, says famed sorcerer and occult author Damien Mulkrin, is forget about the Golden Rule and resign yourself to the fact that vengeance, and plenty of it, is the only thing that will make you happy.

At that point, you can follow Mulkrin’s simple 4-point plan for unleashing the evil powers that will give you the upper hand in your battle with any enemy, no matter how strong he might be, Mulkrin declares.

“Sorcerers, witches and warlocks aren’t the only people who can cast spells and put curses on people. With a little training, anyone can do it – even you,” said Mulkrin, whose frightening new book, When Bad Things Happen to Bad People, is slated for a winter release.

“In fact, my 4-point plan is simple enough for a child to follow. I guarantee you won’t find an easier or more effective way to deal with people who give you a hard time.”

Here is Mulkrin’s 4-point plan. WARNING: Dabbling in the occult can be dangerous or even deadly. Proceed at your own risk. Weekly World News does not take responsibility for any results.

1. Rise from your bed at midnight. Sit cross-legged on the floor in a dark, empty room and whisper the words: “Evil, live, live, evil” over and over for one minute. In your mind’s eye, picture the person you want to curse.

2. As the image of the person appears to you, visualize great harm coming to him or her. For example, you might watch with delight as a car runs over him or he falls down a flight of stairs.

4. As you continue to revel in the imaginary evil you have brought to your enemy, whisper: “Powers of darkness, make this so.” Contemplate your actions for a minute or so and then, says Mulkrin, “your work is done.”

“If you are sincere in your desire to punish an enemy, and have absolutely no reservations about bringing him harm, the curse will work,” he said.

Mulkrin isn’t exactly a household name but paranormal experts and occultists are all too familiar with the sorcerer and his work. In those circles, he is regarded as evil incarnate – a man who has been accused of everything from cannibalism to human sacrifice. But even Mulkrin’s worst critics admit that the sorcerer has a penetrating intelligence and vast knowledge of the black arts.

He also has a knack for simplifying ancient rituals, making them accessible to laymen who have no working knowledge of the occult.

“In ancient times sorcerers relied on elaborate rituals to punish their enemies, but in this day and age, with people having so many demands on their time, these rituals are obsolete,” explained Mulkrin.

“By distilling the process, I have sped things up. If you are of average intelligence, and put your mind to it, there is no reason you can’t put a curse on someone in five minutes or less.”