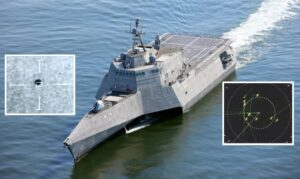 Days after former US president Barack Obama said that the military has evidence regarding mysterious flying objects, a documentary filmmaker released a video clip depicting radar footage that shows, he claimed, a swarm of unidentified flying objects (UFOs) near a navy ship.

Jeremy Corbell posted the 46-second clip on Twitter, saying it was taken from the USS Omaha on July 15, 2019. Corbell, a UFO enthusiast and filmmaker behind the 2018 documentary “Bob Lazar: Area 51 & Flying Saucers,” said the footage showed a “significant UFO event series.”

In the clip, a radar screen is shown with several objects moving around the ship. At one point, an unidentified man is heard saying, “Holy (expletive)! They’re moving fast. … They’re turning around.”

As many as 14 UFOs can be seen on the radar screen. The speed of the UFOs, as claimed in the Instagram post, ranged from about 70 kilometres per hour to 250 kilometres per hour, the speed that lies comparable to three times faster than the USS Omaha, the navy ship that was reportedly swarmed by the UFOs.

He explained the July 15, 2019, encounter off the coast of San Diego lasted two hours from 9pm to 11pm and ended when one of the 1.8 metre objects plunged into the ocean.

No wreckage was ever recovered from the scene when a US submarine went to investigate.

The documentary maker, who runs website Extraordinary Beliefs, claims still images from this footage were included in a briefing to the US’s UFO task force.

“We do not know what, if anything, the navy or Pentagon might be willing to say about the USS Omaha incident (and related UAP encounters),” Mr Corbell said. “But we are confident the incident is a legitimate mystery – and look forward to whatever information might be forthcoming.”

UFOs – now more commonly referred to in scientific and intelligence circles as Unidentified Aerial Phenomena (UAP) – have stepped from being fringe conspiracy theories to a genuine security concern.

And so far there are no public answers as to what appears to be happening in our skies.

However, US officials have started taking the unprecedented step of confirming the authenticity of videos filmed by warships and warplanes of their strange encounters.

And they have admitted they do not know the origin of the strange objects as calls grow in the US for widespread disclosure to figure out what – if anything – the world’s governments are hiding on UFOs.