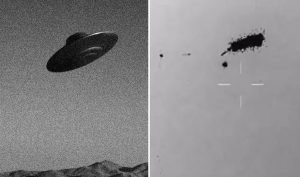 This spectacular video was filmed by the US military in Afghanistan’s Kandahar province in 2011.

The video was released in 2017 thanks to some former US military who decided to reveal it. The video shows an air-to-air missile hitting one (or two) UFO located in the Kandahar war zone.

In the video, you can see four UFOs hovering in the sky which release small objects that fall to the ground. A soldier on the observation tower is trying to identify 4 UFOs with laser, infrared binoculars.

A few minutes later, the military calls in an A-10 Thunderbolt fighter which launches an air-to-air missile at one of the UFOs.

The video shows the rocket striking one or possibly two UFOs, but apparently, the rocket has no effect on objects. Probably objects equipped with an energy shield that prevents them from exploding.

A video uploaded to the NOTICIAS ORDO YouTube channel comments on this event as follows:

“The video was recorded from an observation tower using a night vision fire control system. Four UFOs appeared over the mountains and released smaller objects downward.

“Interestingly, to support the American military base, near which these events took place, the Warthog, an A-10 aircraft, was called in. Aircraft attacked two of the four objects, but when the smoke from the explosions dissipated it became clear that the A-10 attack did not damage the targets. And hadn’t even shifted an inch of their position.”

Very interesting video. Moreover, the appearance of such objects during the war in Afghanistan was reported in different years by many US servicemen.