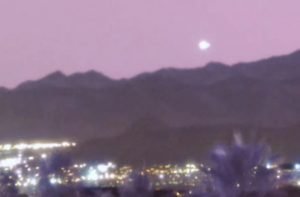 The video, which has recently caught the attention of both social media users and local news channels was filmed by Steve Barone, a resident of Las Vegas, on the evening of 19 December.

The video shows a seemingly large object moving slowly across the city before climbing and moving back at higher speed in the opposite direction.

“Nobody heard any sound at all and the UFO could have covered a 50-mile span in three minutes,” said Barone. “That would equal 1,000mph. To be fair let’s just say it only travelled 25 miles.”

The video has certainly proved popular with over 155,000 views on YouTube, but not everyone agrees that the object that he captured on camera is something out of the ordinary.

Contrary to Barone’s claims, the UFO does not seem to move nearly 1,000 mph anywhere, and it has been hinted that it could be little more than a helicopter or drone flying across the city.

Below you can see the video for yourself.