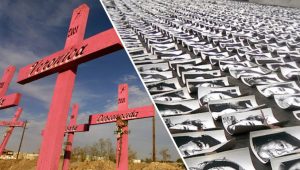 Las Muertas De Juárez – the creepy unsolved serial murder case, is currently considered by the locals as an almost paranormal phenomenon, and by the authorities as a scandal of epic proportions. None of this is an exaggeration – the mysterious killer in the northern Mexican city of Ciudad Juárez has murdered a recorded 400 women, and suspected thousands between 1993 and 2003. Introducing Los Feminicidios…

The Murders of Juarez

The murders in and of themselves would not stand out as serial killings except for the tremendous number of them. The victims are beaten and raped in only slightly secluded portions of the town. A vacant lot 25 feet from the road has proven more than secluded enough for the killer.

With far over 400 kills the police have made surprisingly few arrests, or even determined few suspects. In 1995 Abdul Latif Sharif was arrested for one of the earliest murders: a young woman named Elizabeth Castro Garcia.

This arrest made a lot of sense at the time, Abdul was an Egyptian chemist who had emigrated to the South Western United States in 1970. His work connected him to some of the largest American biotech and life sciences corporations, and it is suspected that these corporations shielded him from persecution while he raped numerous women.

In 1984 he was sentenced to twelve years in prison for one of those rapes, but was released only five years later. Breaking the terms of his parole he fled to Ciudad Juárez, Mexico where it was suspected that he began raping again.

Although a number of rapes and murders had already begun in the town, the authorities arrested him for the torture, rape, and murder of Elizabeth Garcia. However, less than one year after his incarceration, Abdul died of what was only reported as “natural causes”.

The case appeared closed, as the murders had stopped upon his arrest, but within thirteen hours of his death they began again. Due to the many similarities in the killings, the authorities manufactured a theory wherein Abdul Sharif had somehow fallen in with a prolific gang in the region known as Los Rebeldes and that these new killings were being carried out by them.

This was clearly a very shaky theory, and although several gang members were detained for questioning, none were ever charged.

Now running out of options and the death toll climbing beyond one hundred, the authorities launched upon one ridiculous theory after another. Several bus drivers whose routes took them between Juarez and neighboring towns were detained but never charged.

In 2001 two cotton field workers were arrested simply on the basis that their fields were in the vicinity of the latest murders. It would later be discovered that the cotton workers were beaten into their forced confessions.

Now that the death toll was in the hundreds, Amnesty International had become involved and a number of organizations mainly promoted by family members of the victims had begun protesting by day, and patrolling by night. The locals began to whisper rumors that Abdul was and is the murderer, believing that following his death his phantom had once again taken to the streets.

By 2004 over 700,000 of Juarez’s population of two million have fled the city and found a home elsewhere. In reaction to what was fast becoming an international embarrassment Interior Secretary Santiago Creel directly appointed what could be considered a “top gun” investigator, Special Prosecutor Maria Lopez Urbina.

Within the first six months of her appointment Maria would uncover numerous breaches of policy within the Juarez police department, including the above mentioned forced confessions.

Today, Juarez is a shadow of its former self – only a fraction of the population still remains, but the killings continue. The hunt for Los Feminicidios remains as fruitless as it was in the 1990s.