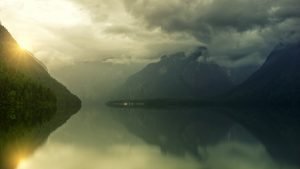 There are many amazing places on Earth, the secrets of which have not been unraveled by man. The abnormal processes taking place there are not amenable to the laws of logic and physics.

There is one anomalous zone in Argentina – Lake Salantina, where gravity simply turns off from time to time, reports sciencedevices.com. Unfortunately, this phenomenon is rare and chaotic. When the force of gravity is “turned off”, people are thrown into the air for several meters – regardless of where they were at that time – in the water or on the beach.

Caught up by an unknown force, people soar above the ground to a height of up to 3 meters. If they do not move, then they can hold out for about 30-40 minutes. At the slightest movement, weightlessness disappears. Scientists have not yet been able to find a logical explanation for this phenomenon.

The activity of the anomalous zone defies any logic. The duration of this anomalous phenomenon ranges from a few seconds to half an hour. Sometimes, in order to wait for the “disconnection of gravity”, people wait for several weeks on the shore. Sometimes gravity stops working several times a day.

There are still no official studies on the lake, and scientists can not give an exact answer to the question of why the loss of gravity occurs.

One of the few researchers – physicist Carlos Penas – constantly monitors the zone of gravitational anomalies and claims that the devices always work without a glitch. Nothing portends a “disconnection” of physical strength.

Some daredevils conduct experiments on the lake independently. Those who managed to get rid of gravity, argue that it is very scary and looks like swimming under water. At the same time, gravity “turns on” is also very smooth, so the landings turn out to be successful.

Since 1997, local residents and tourists have noticed the appearance of rounded flying objects on the lake and nearby. As a rule, they glowed bright yellow and flew out from under the water or, on the contrary, hid in it. There are many pictures of these UFOs in Argentinean magazines and media.

Some researchers directly connect the appearance of the phenomenon of weightlessness with the activity of unknown creatures at the bottom of the lake. Agree, when there is a spontaneous change in gravity, you involuntarily begin to believe in fantastic versions.

Carlos Penas shared his feelings from several cases of experienced weightlessness: “The first time I was scared and didn’t understand anything. I was lifted one and a half meters above the water, and I began to wave my arms and scream. The impact ended quickly.”

“The second time I witnessed how a guy and a girl bathing in the lake were lifted into the air. After that, I began to spend a lot of time observing the lake. Over 20 years, I have collected more than 100 evidence of visits to Salantina by unidentified flying and floating objects. It seems to me that these two phenomena are related”

“No matter how much I communicate with physicists, no one could give a clear explanation. Therefore, one has to turn to the realm of hypotheses, which many consider unscientific. I managed to repeatedly see UFOs and levitating people with my own eyes. Moreover, I felt it myself. How to describe the feeling? You seem to be in the water, only in the air and you can breathe. The main thing is not to move, otherwise the impact on you will stop.”

What to say? This phenomenon has been studied by academic scientists for several years, but so far it has not been possible to explain it. Who knows what can cause local levitation over the lake?

The Mystery How Did One Man Build The Coral Castle Alone