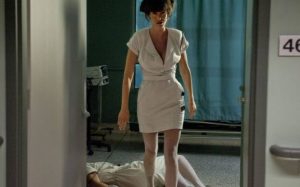 All of us have within us a monster – it is our humanity that chains and restrains us from the temptation of evil acts, but under the right circumstances, even our good deeds can be the temptation that leads to darkness.

Lainz General Hospital was, for the most part, a one way street for the patients admitted within its walls.

Suffering from a variety of terminal illnesses or simply of old age, the majority were never meant to leave. In 1983, a starry eyed young nurse with the best of intentions named Waltraud Wagner had seen enough of the suffering, and calling upon her three coworkers they took it upon themselves to end that suffering.

At 23 years old Waltraud secretly took the life of a terminally ill patient via a lethal overdose of morphine. How long it took for the four to succumb to the temptations of playing God nobody can know for certain, but somewhere along the line morphine stopped providing enough of a thrill.

The four devised a new method for their kills: while one would hold the patient’s nose closed, the others would restrain them and pour water down their throat. It wasn’t just a cruel method, it was very intelligent as well.

Despite the fact that they had moved on from compassion to homicidal thrills and were now killing patients that simply annoyed them, they continued to use the term “angels” when describing themselves.

They also had their favorite nicknames for their various acts. Leaving their mark on the papers of the next chosen victim was termed a “ticket to god”.

Six years later the four were overheard laughing and bragging about their latest kill in a local tavern. Authorities were alerted and the investigation began. Through the course of the investigation evidence was discovered, including the testimony of the youngest of the four that the murder count had exceeded over two hundred in just the six years the girls were calling themselves “angels”.

Due to pressure from various religious groups and the political nature of the trial, the courts accepted a plea bargain from the women confessing to only 49 murders. The prosecuting attorney left the court room with the statement “It’s a small step from killing the terminally ill to the killing of insolent, burdensome patients, and from there to that which was known under the Third Reich as euthanasia. It is a door that must never be opened again.”, and the story of the Lainz Angels of Death came to a close.

The next time you’re admitted to a hospital, you’ll no doubt be glad you’re not in Austria – except that in the same year the Angels of Death were killing patients by the hundreds, infants were turning up dead from digoxin poisoning in the state of the art Hospital for Sick Children on the other side of the world in Toronto Canada. Beware, monsters are all around us.

The Tombstone of Nancy Luce – The Chicken Lady