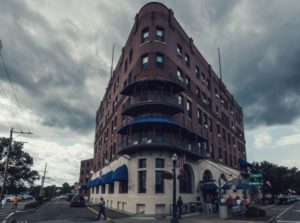 If the rat race of festivals that fill Columbus each summer aren’t your thing, Columbus Ghost Tours give to you The Lafayette Hotel: a time machine to the steamboat era that sits at the convergence of the Ohio and Muskingum Rivers in Marietta, Ohio.

Marietta (which was named in honor of Marie Antoinette, by the way) has a lot going for it, from a paranormal perspective. The area was the site of an elaborate Hopewell earthwork complex used for ritual and habitation.

For hundreds of years Native Americans placed a great spiritual significance on the confluence of these two rivers. Today modern ghost hunters theorize that the dead may use the energy created by such confluences to manifest themselves in our world. This certainly seems to be the case for the Lafayette and much of Marietta.

While most of the Native earthworks were destroyed by “progress”, city planners preserved the largest mound by surrounding it with a cemetery that contains the largest number of Revolutionary War soldier burials in the United States.

The reason so many of these soldiers ended up in Marietta is because General Rufus Putnam was swayed by the beauty that his friend, George Washington, said was in abundance there. Perhaps old George needed wooden eyes!

Putnam and 47 other war veterans purchased the land, mapped out a city that they envisioned would become the capitol of the new nation (that would have made for different Ohio!) and sallied forth.

Landing near what would become the front door of the Lafayette Hotel in April of 1788, the pioneers quickly began construction of a fortification to protect themselves from the hostile Native population.

In 1804 they built the Mayor’s house on the site that would later become the five story tall Lafayette. When a fire destroyed the house in 1888 the city built a couple of fancy hotels, named the Bellevue Hotel and the Mansion House, on the site.

Twenty four years later another fire destroyed the buildings and, in 1918, the Hotel Lafayette was born, named after the Marquis de Lafayette, who set his ship aground here in 1825.

Teeming with ghosts, the Lafayette is most know for it’s third floor, which is unusual in that it is the only floor to have guests die in the boarding house’s 100 year existence. I challenge you to find another hotel that has had all deaths occur on a single floor. It just doesn’t happen unless you count one story hotels.

This is also the floor where the most paranormal activity occurs. 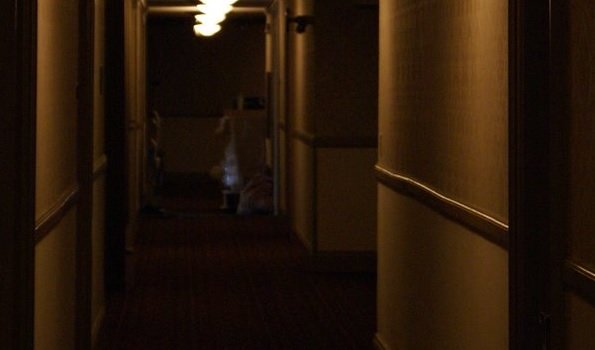 Guests of the third floor often report their belongings misplaced in the short interm of stepping into the bathroom or looking at their phone. Some have seen a woman in a pinafore standing in their room before suddenly vanishing.

Folks also see shadows moving around their otherwise empty room. Sometimes guests and staff witness a small boy in turn of the century clothing running through the hall. He is also seen standing by the door of the basement’s “ladies retiring room” – the same restroom where others have reported the sounds of a woman sobbing.

A feeling of unease and disquiet often overcomes the tenants of the third floor of the Hoag Wing, an addition built on the foundation of the Mansion House by the hotel’s most prominent owner, Durwood Hoag.

Mr. Hoag owned and managed the hotel from shortly after it’s inception until 1973. Think of the movie “The Grand Budapest Hotel” and you’ve got the idea. He was reputed for his great sense of humor and for never letting a guests glass go empty.

He was also a man who ran a tight ship and never slagged at telling an employee when there was a job to be done – even in the middle of the night. When he ran the hotel he lived on the third floor of the Hoag wing, incidentally.

Hotel staff loathe being sent to that area as they always feel they are being watched, a feeling often accompanied by unexplained footsteps and exploding lightbulbs. It’s micromanagement from beyond the grave!

It seems that one of Mr. Hoag’s favorite postmortem activities is to fidget with lighting. In fact, the bartender that was working the night we were there told us that, even though he doesn’t believe in ghosts, he has experienced flashes of light similar to a camera bulb for which, upon investigation, he could find no known cause.

Several servers have spotted Mr. Hoag sitting in a corner booth of the hotel’s restaurant, the Gun Room, as they are preparing to open in the mornings. They always mistake him for a living person and try to wait on him. When he doesn’t respond they usually turn to get assistance or turn on the lights and look back to find that he has vanished.

Just like every haunted hotel Columbus Ghost Tours run across, security gaurds often hear the sounds of parties coming from closed ballrooms late at night only to find them empty. You’d be suprised how often that happens.

Another common occurrence in old hotels is the presence of a ghostly lady in white. After research, Columbus Ghost Tours came across one account of a guest who witnessed a woman in a white high collared dress glide across the floor of the hotel bar only to vanish upon reaching the lobby. She has been seen by other guests on various floors of the hotel as well.

“When we were there last week we were lucky enough to be given (by pure chance) the last 3rd floor room in the original building right next to the entrance to the Hoag wing.

Our first glance down the narrow hallway of the Hoag addition revealed lacey white curtains eerily blowing from the river breeze. I was certain we would hit supernatural paydirt!

Due to the large number of haunted watering holes within spitting distance of the hotel, however, I ended up seeing so many spirits of a liquid nature that I wouldn’t have noticed if those of the ectoplasmic variety had dipped their rattling chains directly into my cocktail glass by night’s end.

Oh well, there is always next time. I like this old hotel with it’s Victorian decor and noisy old air conditioners and many ghosts. It’s a great place to visit to be transported back in time and possibly have residents of the past travel forward to pay you a visit as well.”