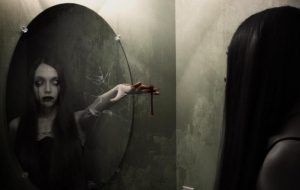 I was going through the site and reading some of the stories, and wanted to contribute mine.

Growing up, I had always dealt with “paranormal” happenings with my family, so I am definitely aware of the feelings and senses that go along with it.

This is something that happened just a year and a half ago.

I had moved in with my partner at their house, and had always had a strange feeling about the house. The only history that we were aware of it was that it was built in the 1920’s, and a woman, her husband, and their child lived in the house.

There were several times when I saw shadows throughout the house. (both white and dark shawdows), as well as always feeling a presence around me. I was a little uncomfortable about them, but I was used to seeing them.

Anyway, one particular night my partner and I were in bed. I was wakened up by a woman’s soft voice, that seemed to be calling me from the mirror hanging next to the bed. I was calling my name out, to turn around and look at her, as well as help her. I was too scared to turn around and look, so I just shrugged it off and went back to sleep. Since I was in a deep sleep before, I just figured that I was dreaming the whole thing. I did not mention it to my partner.

The next day, I was napping and had a very vivid dream about what “may” have happened in this house. The dream consisted of a beautiful woman (long curly auburn hair, green eyes, pale complexion) being beaten by her husband. Her child was in the room with them, watching the entire thing. Her husband was a tall man, strong body, with black hair. In the dream she was screaming for someone to help her, and finally, a black man came into the room and pulled her and the child out of the room. The dream was so intense and vivid, I was horrified when I woke up.

I then had to let my partner know about the dream I just had as well as the one I had the night prior. As I started to tell him about the “dream” I had at night, he said that HE was wakened by a voice that was calling MY name. He said that he looked over and in the mirror was a woman, and a man standing slightly behind her. He as well thought it was a dream, but I asked him to describe the woman and the man. We of course had the exact same description with the two, as well as the same description with the voice. That scared me pretty bad.

I do not know exactly if this was all some kind of “psychic connection” between us two, or if all of this actually happened.